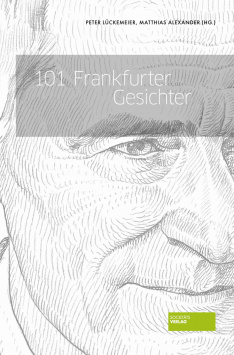 The "Frankfurter Gesichter" belong to the oldest sections of the Frankfurter Allgemeine Zeitung. Since 1959 more than four thousand of these portraits have been published, whereby the personalities presented have never been depicted with a staged photograph, but with a drawn portrait. Six draughtsmen have so far given this section their very special style. Since 1999 Oliver Sebel has been regularly swinging his drawing pencil to introduce the "Frankfurter Gesichter". Peter Lückemeier du Matthias Alexander selected those from the 600 or so portraits he painted between 1999 and 2011 that he thought might be of greatest interest to the reader, and compiled the "101 Frankfurt Faces" collection from them.

This section presents those personalities who are interesting, who shape Frankfurt in any way or who are important for the cultural or political life of the Main metropolis. The "Faces" collected in this book are presented chronologically by the date of their publication in the FAZ, with the result that some of the portraits are already obsolete. But that's not all that bad, because the book is not only a good testimony to the city's versatility, but also a kind of small chronicle of Frankfurt's recent cultural and political history.

Whether Paolo Carignani, who at the time of his portrait was still conductor at the Frankfurt Opera, brother Paulus, actor Peter Lerchbaumer, Interior Minister Boris Rhein, theatre maker Willy Praml, Alexandra Prinzessin von Hannover, the President of the Hochschule für Musik und darstellende Kunst Thomas Rietschel, architect Nikolaus Hirsch, author Constanze Kleis, the singer and actress Sabine Fischmann or Achim Frenz, director of the caricatura Museum, they are all "Frankfurter Gesichter", which are presented in short but concise portraits.

The texts are by no means dry biographies. Rather, life and work of the respective personalities are embedded in small snapshots. That never really goes into depth, but that's not the intention of these portraits. Rather, the aim is to give a brief impression of what makes these people a "Frankfurt face," regardless of whether the people portrayed live in Frankfurt or not.

"101 Frankfurt Faces" is a beautiful collection that presents not only people who are known to the general public, but also those who move primarily behind the scenes, but from there make an important contribution to culture, education, politics, entertainment, leisure or culinary delights. And by the way, it also becomes clear how much life in a city like Frankfurt is constantly on the move. All this makes this portrait collection: absolutely recommendable!