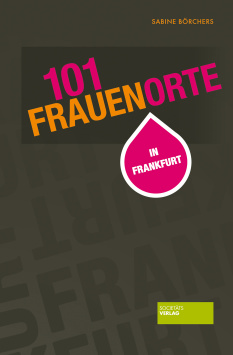 After the great success of the three "Unorte" books, the decision was quickly made to continue the popular series with specific topics. In addition to the "101 Money Places in Frankfurt", which have recently been published, other books should also present special places for women and men in the city. While we still have to wait a little while for the "101 Men's Places", Sabine Börchers has compiled "101 Women's Places" after almost a year of research, which she now presents in her extremely entertaining and sometimes very surprising book. While the former local editor and social reporter of the FNP had initially thought for herself that it would be very difficult to find 101 women's places in Frankfurt, in the end it became even more - and the list will then be supplemented in future on the website accompanying the book Http://frauenorte-frankfurt.de/.

The book is structured in the proven "Unorte" manner: The left half of each double page is decorated with a picture, while the right side has a short but informative text about the place. So far, so familiar. But as far as the content is concerned, this book has a lot of surprises to offer even for long-established Frankfurters. For example, we learn here that in 1927 the racing driver Clärenore Stinnes was the first person ever to circumnavigate the world in a standard passenger car from Frankfurt. The tomb of the first woman from Frankfurt, a 4-year-old Merovingian girl from the year 700 - 730, who was only discovered in 1992, is visited. It also presents the Steinerne Haus as a women's village, as the first German women's football team was founded here in 1930. Kätchen Paulus, the pioneer of the parachute, came from Frankfurt as well as Germany's first chief physician in the Bürgerhospital.

Alongside many historical women and very well-known names, however, the book is also dedicated to some unknown women and those who shape the cityscape today in a very special way. Mrs. Schreiber from the Kleinmarkthalle is of course just as important as Gisela Paul with her Green Sauce. Very well-known and obvious places like Justitia auf dem Römerberg or Frau Rauscher Brunnen in Sachsenhausen are mentioned. But also many completely unknown institutions such as the Archive of Women and Music, the most comprehensive international archive of female composers worldwide, or important women such as Eilke Brigitte Helm, who in the early 1980s treated the first AIDS patients throughout Germany in Niederrad and thus laid the foundation stone for German HIV medicine, were presented.

This results in a really colourful mixture of the known and the unknown, the interesting and the curious, the historical and the current. Sabine Börchers, who has already written books about the Gesellschaftshaus in the Palmengarten and the Tigerpalast, manages very well to make even well-known places appear in a completely new light. Anyone who has read the book about the windows in the Old Nikolai Church, the naked sculpture of a woman on the Westend campus or the Madonna Jutta at the Stone House on the Römerberg will in future pass by these places with more open eyes and a different view. Apart from the fact that the book makes you want to have a look at the places presented here (again) for yourself, it's also a lot of fun to read. And for that we have a clear one: Absolutely recommendable! 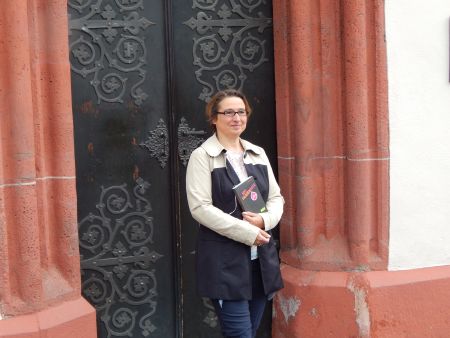