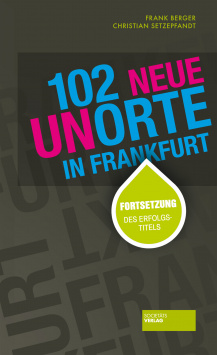 Unknown places that may not be among the most beautiful sights, but are worth a visit for a variety of reasons, are available in most cities. Frankfurt has many of these interesting "Unorte" to offer. Frank Berger and Christian Setzepfand have compiled 101 of them in a book that enjoyed enormous popularity in a very short time.

Unbelievably pleased the makers of "101 Unorte" about the success of their book and the opportunity to introduce 102 new Unorte to interested readers. Even for many long-established Frankfurters there are many more or less hidden places to discover, which one probably has seen before, but was not aware of their importance until now. The interesting thing about this is that, in addition to many rather hidden places, numerous places presented in the book are located in well-known and highly frequented places, such as the Römerberg, the main cemetery, the Hauptwache, the cathedral or on the banks of the Main.

The reader learns something unusual here, such as that behind Europe, the largest of the e-cinemas, there is a room that should be a small sanctuary for film lovers. It will be revealed which un-place has what it takes to be described as the ugliest place in Frankfurt's inner city. There is a visit to the birthplace of Struwwelpeters or to one of the first residential skyscrapers built in the Fahrgasse after the end of the Second World War. And it reveals what the crypt of the von Schweitzer family in Frankfurt's main cemetery is all about or where the big beer riots took place in 1873.

Unsustainable, informative and surprising, Frank Berger and Christian Setztpfand lead through their second "Unorte" book. And as already with the predecessor it becomes again clear here that it is worthwhile to walk through the city with open eyes and to leave also once the well-known paths. Because only when you know not only the representative buildings and famous sights, but also the numerous places and their history, you get to know the city in all its facets. And this is much more fun thanks to a book like "102 neue Unorte". Therefore: