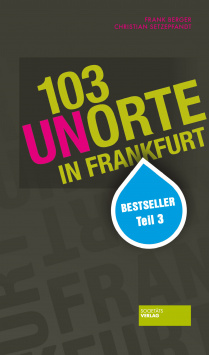 UNorte, those places you hardly find in a travel guide and which are overlooked not only by tourists but also by most locals, do not seem to be a rarity in Frankfurt. After Frank Berger and Christian Setzepfandt presented "101 Unorte in Frankfurt" to their readers in 2011, this unusual view of the city was enthusiastically received. So enthusiastic that in 2012 a sequel followed with "102 Unorte in Frankfurt". And even this quickly proved to be a great success, which is why the authors - also with the help of suggestions from their readers - set off again on a search for very special places in the Main metropolis. The result is now with the third volume of the series, which is appropriately called "103 Unorte in Frankfurt".

UNscheinbar many of the 103 new Unorte come along. But as in the two predecessors, Frank Berger and Christian Setzepfand show once again that behind many an unadorned façade there is an exciting and interesting story that lets you see these places with completely new eyes. Be it a house in Nordend, which became the scene of an anarchist murder in 1885, a house entrance in Kaiserstrasse, which played an important role in Frankfurt's gas supply in the 1920s, or the headquarters of the first Frankfurt telephone exchange in Stiftstrasse, The Grindbrunnen at Untermainkai, which is invisible as you pass it, or a house in the Alte Gasse, where the filmmaker Rainer Werner Fassbinder once lived - everywhere in the city hide places with a turbulent past or places with special features that many will only discover by reading this book.

Rediscover the unknown - this third volume is sure to whet your appetite again. Thus the reader learns something here about how a street in Nordend came to the unusual name "Iron Hand", where Frankfurt's first railway bridge stands, where apple wine is stored in submarines or where the deepest point of the city is. You get to know Orange Beach, read about the art theft in the Städel or learn how the transplantation of a tree in 1907 became a real media event.

It is impossible not to be carried away by these stories and not to feel the desire to take a look at these new unpopulated places for yourself - or to set out in search of other unrecognized places in the city. Those who have already devoured the first two volumes with enthusiasm should not miss this third book. Recommended]