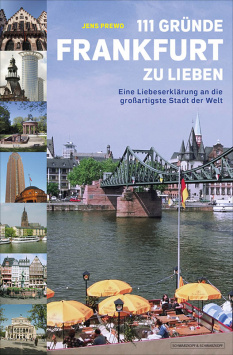 If you tell someone from outside of Frankfurt that you're from Frankfurt, the first reaction is usually not pure enthusiasm, but rather a mixture of pity and sniffiness. Unfortunately, Frankfurt does not have a really good reputation. For many, the image of the cesspool of sin, which is dominated by drugs and prostitution, still predominates. There is no question that Frankfurt is much better than its reputation. But why do we Frankfurters love our city so much? Why can we identify so much with Friedrich Stoltze's saying "it doesn't want to be in my team, how can no man be a Frankfort man"? Jens Prewo, a journalist for the JOURNAL FRANKFURT, among others, knows not only one but 111 reasons that make Frankfurt so endearing.

Culinary, geographical, curious or historical things are just as represented as relaxing leisure tips, special top performances of Frankfurt or the special charm of the individual districts. With an amusing wink and unerring power of observation, Prewo takes his readers on a tour of Frankfurt, revealing a number of details that are likely to be new to many native Frankfurters. In other descriptions you find yourself or your own experiences and observations again, which of course clearly intensifies the fun of reading.

And even if you don't see each of the 111 examples listed here as a reason for your own love of Frankfurt, in the end it becomes clear that it is not just one thing that you love so much about this city, but that there are many small things that together make up the charm and appeal of the Main metropolis. And what may then lead to a negative image of Frankfurt for outsiders is only another reason for its inhabitants to love this very special city. The best example of this is Prewo's Reason No. 23: "Because everyone in the cider business is served in an unfriendly manner". If you don't know the rough charm of the apple wine bars in Sachsenhausen, you might be surprised by the way they are treated there. For Frankfurters, however, this is just part of an evening with Ebbelwei and Handkäs.

The small cinema culture of the city, the location on the Main, the Grüne Soße and its festival, the Ebbelwei Express, the Frankfurt club scene, the book fair, Best Worscht in Town, the Friedberger Markt, the water houses, the Tigerpalast or the German National Library - all these and many more are the reasons why Jens Prewo loves Frankfurt so much. It is a love that sometimes allows critical words and self-irony, and one that readers are only too happy to share when reading the 111 short stories. A charming, amusing and interesting book that can be warmly recommended to all Frankfurt lovers!