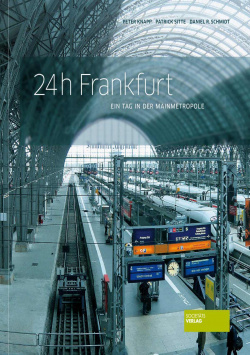 24h Frankfurt - A day in the Main metropolis

Everyday life in a big city like Frankfurt often leads to people taking the hustle and bustle for granted and rarely thinking about who is actually behind all the services that you consciously or unconsciously use every day or who does the work that makes life in the big city so pleasant. Moreover, on the surface it also looks as if Frankfurt, unlike New York, will at some point go to sleep and rest more or less idly. But of course this is really not the case. Because even when most of us are relaxed bedding our heads on our pillows, many diligent people make sure that the city works.

"24h Frankfurt - A day in the Main metropolis" looks behind the surface and shows people who, as a small but important part of the whole, ensure that the pulse of the city continues to beat. In the book, each hour of the day is dedicated to a specific person and their profession. For example, the reader can climb the roofs of the city with chimney sweep Natascha Günther, look over the shoulder of Jörg Greiser as he looks after train passengers at the main railway station, eat freshly pressed apple wine with fruit grower Andreas Schneider, drive through the dark city with night bus driver Hans-Jürgen Freudenberger or patrol with police officers Dale Warzynski and Ilona Beck. There is also an early morning view of a bakery, a visit to the Niederrad cogeneration plant or an excursion to the Griesheim lock.

After short portraits on the first page, there is a multi-page photo gallery on the persons presented and their fields of work. The texts are compact, but informative, the pictures offer a brief insight into the respective working day, often in direct context with the city of Frankfurt, from which one also gets a new and unusual perspective. The pictures from Tuesday Night Skating, for example, the evening visit to the Dippemess or the impressions from the Frischezentrum in Kalbach or from the traditional brewery Binding make "24h Frankfurt - Ein Tag in der Mainmetropole" a very special kind of Frankfurt illustrated book.

The three authors Peter Knapp, Patrick Sitte and Daniel R. Schmidt have given the city of Frankfurt and its citizens a beautiful, interesting and loving portrait with their view of a quite normal day in the Main metropolis, which stands out pleasantly from the usual city portraits in many respects. A recommendable illustrated book for all those who want to experience the working day in Frankfurt from a slightly different perspective and discover new sides of the city!