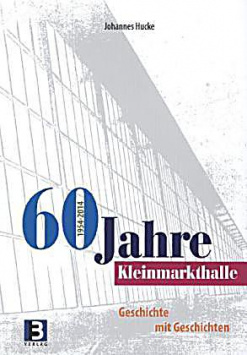 An important piece from the heart of Frankfurt celebrates a round birthday in 2014: the Kleinmarkthalle turns 60! An anniversary that does not only have to be celebrated on site. That's why Johannes Hucke is now presenting "60 Years Kleinmarkthalle", not just a charming birthday greeting to the popular market hall. He also offers readers an interesting look at the history of the building, which he accompanies with numerous archive footage and invites them, always accompanied by quotations from Émile Zola's novel "The Belly of Paris", to a tour through the lively and above all tasty hustle and bustle of the Kleinmarkthalle.

After a brief introduction, the journey through time begins. The reader first gets to know the market history of Frankfurt and the first market hall, inaugurated in 1879, before the construction and opening of the new Kleinmarkthalle takes place after its destruction in the Second World War. Hucke tells on the following pages how the Kleinmarkthalle itself, the trade and also the relationship of the Frankfurters to this institution has changed in the following decades and also briefly traces the struggle for the preservation of the hall, which for some time was to give way to a new, more modern building, until the lack of money in the city treasury has put an (interim) end to the discussion. Now the first thing that needs to be done in the coming years is a thorough renovation. This is, despite the very original charm of the Kleinmarkthalle, urgently needed.

After the nearly twenty-page history lesson, Hucke takes the reader on five thematic tours of the hall. After having visited the two entrance areas with their shops like the newspaper stand Holzmann, the Rollanderhof, the Hessen Shop, the legendary bicycle Thöt and of course the rustic Marktstubb, the reader can stroll through the rich offer of flowers, meat, greenery and delicacies. Not only, again richly illustrated, the goods, but also their traders are presented in more detail. Here you can read all sorts of amusing and interesting stories from everyday work in the Kleinmarkthalle, which beautifully illustrate the very special charm of this "piece of Frankfurt with a heart".

Once you've started reading the booklet, it's hard to put it out of hand before the last of the 93 pages. The five tours in particular not only whet the appetite for visiting the Kleinmarkthalle again and taking the time to really try and buy something at each of the stands or simply to talk to the traders. Sometimes the water comes together in your mouth when Hucke executes what delicacies are offered for sale here. In combination with the personal stories of dealers and customers, an extremely entertaining, endearing and fitting homage to the popular birthday child has been created, which can be warmly recommended not only to all regular customers, but also to every Frankfurt fan. With this in mind: Congratulations, Kleinmarkthalle!