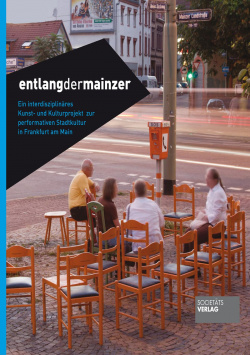 The Mainzer Landstrasse, with a length of about 8.4 km the second longest street in Frankfurt, does not necessarily have the best reputation. The heavily frequented street is noisy, has some architecturally not very appealing sections to offer and also passes through here and there what is often referred to as the "social focal point". But the Mainzer is more than just a typical metropolitan arterial road. It is also a reflection of the versatility that characterises Frankfurt. Urban planning and social contrasts can be experienced here, from the beginning lined with modern bank towers to the rather village-like end in the Nied district. And it was precisely this versatility, this clash of opposites, that inspired the Evangelische Akademie Frankfurt to the cultural project "Along the Mainz River", which is now being traced once again in book form.

50 artists, scientists and researchers took part in the interdisciplinary art and culture project that started on September 5, 2012. There were exhibitions, performances, room installations, panel discussions, video installations, dance performances, street art, a pinhole camera performance, a kiosk tour and much more at a total of sixteen exhibition venues along the street and in public space. An ambitious, versatile, exciting and surprising project, which is now extensively traced in the book "Along the Mainz River".

Besides introductory texts, all presentations and works in words and pictures are presented in this volume. The photographs of actions such as a dance performance on the open street, a BlindDate action, or a sculpture garden in Nied can only reproduce a fraction of the actual mood during these projects in small snapshots. Nevertheless, the interplay between the images and the accompanying texts makes clear the ambitions with which the individual participants approached this art and culture project and how much effort and passion they invested in the implementation of their contributions.

For all those who have visited parts of this cultural project, this book is a very beautiful reminder of what they experienced there. And for readers who missed the project, "Along the Mainzer" offers a very entertaining, informative and also exciting opportunity to get to know one of the city's largest streets from completely new angles. Recommended]