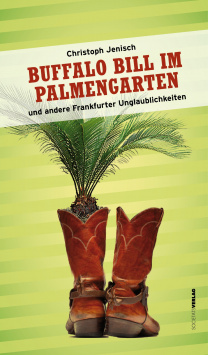 Buffalo Bill in the Palm Garden

The history of Frankfurt is a story full of incredibleness. In his book "Buffalo Bill im Palmengarten" Christoph Jenisch has now compiled some of these curiosities and turned them into an extremely entertaining whole. For example, the reader learns how the Main metropolis really got its name. The legend of the Frankish king, who was able to cross the Main River with the help of a ford, exposes Jenisch as pure fiction. It was actually Frank, the god of schnapps and dirty songs, who, in the form of an ox, impregnated the constantly nagging daughter of a South Hessian beer brewer at a particularly romantic spot on the Main River, who was responsible for the city's name. Why, the reader learns here, just like the tremendous story, how the Bornheimer Kerb led to the cathedral burning down and of course also where the green sauce really comes from. And of course the mystery is also solved why the man from Frankfurt is always in such a "good mood".

"Buffalo Bill im Palmengarten" presents the history of Frankfurt as it really happened - or at least in a similar way. Always told with a twinkle in his eye and lots of typical Frankfurt charm, Christoph Jenisch, who was born in Frankfurt, guides his readers through the history of the Main metropolis and makes it clear why Frankfurt is "of course the best and most beautiful city of all", one of the reasons why the man from Frankfurt is so reluctant to leave his homeland.

What makes this book so entertaining and amusing is that the stories are told in a way that is entertaining to read for both Frankfurters and non-residents. However, Frankfurters will have a little more fun, because the many allusions to local peculiarities and events - such as from the success story of Eintracht or the constant rivalry with Offenbach - will probably not be understood as a funny side blow by readers who only know Frankfurt as a trade fair city. The Frankfurt, however, is repeatedly animated to a broad grin, especially in connection with a "guude Schoppe".

For non-Frankfurters the book is also recommendable, especially if a visit to the Main metropolis is planned. Here you will find out what you should never do if you want to return home unharmed. This refers primarily to the order of Äppelwoi or the proper consumption of Handkäs. If you afford a faux pas here, you might get the chance to experience Frankfurt's hospitality to the full.

"Buffalo Bill im Palmengarten" is a delicious journey through Frankfurt's history, cultivating the typical characteristics of Frankfurters on the one hand, but not taking itself too seriously with a charming wink. If you think you already know everything about Frankfurt am Main, or if you just want to be entertained with a lot of Frankfurt's local color, you should read this book.