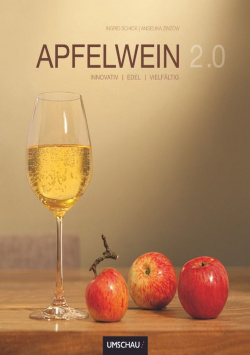 "Innovative, noble, versatile", this is how the cider, which is so popular among Frankfurters, presents itself in the new book "Apfelwein 2.0" by Ingrid Schick and the photographer Angelika Zinzow. The beautifully designed volume not only focuses on the drink, but also on its makers. It quickly becomes clear that cider is much more than the delicious pint in between. In recent years, a whole new generation of apple winegrowers has developed, taking advantage of the versatility of apples to free cider from its dusty image.

And exactly this new generation of winegrowers is presented in the first part of the book, followed by an informative chapter about the raw material apple. Growing areas, variety of varieties, harvest, all this is illuminated here in an educational and entertaining way. One term describes both the book and the new generation of apple wine excellently: versatility! For just as the book not only illuminates one page of modern apple wine culture, but also offers manufacturers, apple varieties, history, top gastronomes and numerous recipes, "Apfelwein 2.0" also shows a tremendous versatility: sparkling apple wine, cider, ice apple, even cider mustard, cider ice cream or cider soap are now offered - and there seems to be no limit to creativity in dealing with gold for the throat.

What makes this book so charming and worth reading is that Ingrid Schick with her texts and Angelika Zinzow with her beautiful pictures introduce not only the world around cider, but also the people behind the cloth. They are of course not limited to the Frankfurt and Hesse region, because cider is not only produced and enjoyed here. For example, they visit the first garage apple winegrowers in northern Germany, introduce Thuringia's only apple winegrower, taste Viez from the Saarland or stroll through the orchard meadows in central Franconia. In between, the reader is shown how apple wine is made, he witnesses an amusing Facebook discussion about the term "Äppler" or learns that apple wine can now come not only from the bottle or the pitcher, but also from the can.

"Apfelwein 2.0" is a beautifully designed, informative and entertainingly written volume that offers a comprehensive insight into the tasty new world of apple wine culture. The book is suitable for browsing as well as a source for many tips. Whether for the next excursion to one of the growing regions or for recooking the numerous recipes, everyone will find the right source of inspiration here. All this makes this book not only, but especially for apple wine lovers an absolute must!