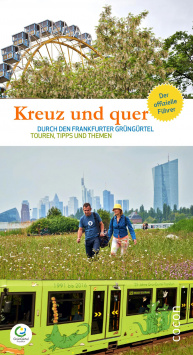 Cross and across the Frankfurt GreenBelt

The appearance of Frankfurt is of course determined by its skyline. And so one could come up with the idea that the city, sometimes affectionately called Mainhattan, is dominated by skyscraper canyons and concrete blocks. But that would certainly be wrong for the banking and trade fair metropolis. Apart from the fact that Frankfurt has some really beautiful districts and picturesque corners, the eighty square kilometres of green belt also makes a significant contribution to the flair of the city. In 2016 the Frankfurter GrünGürtel celebrated its 25th birthday. A good reason to update the extensive guide, filled with innumerable tips, once again.

"Kreuz und quer durch den Frankfurter GrünGürtel" not only presents the GrünGürtel and its three landscape areas (Stadtwald, Berger Rücken, Niddatal), the book also suggests a number of cycling or hiking tours, with more detailed information on length, landscape, special features, how to get there or gastronomic stopovers. The whole is supplemented again and again with worth knowing information and special TopTipps, which emphasize characteristics of the green belt again

Over 20 routes for moving and to the Radfahren, 100 Tipps approximately around nature, culture and seasons, approximately 15 more detailed lit up topics like the scattered fruit meadows of the Gründg?rtel, the animals, which live in the landscape areas or tasty picnic prescriptions for a beautiful trip into the green, are summarized in the extensive book. The whole thing is rounded off by numerous photos that make you want to explore the GrünGürtel and all its versatility immediately.

The beauty of the book, which is also accompanied by a large-format map of the GrünGürtel, is that the reader not only finds many familiar destinations here, but also many at first glance hidden places that are worth visiting. If you want to discover the green side of Frankfurt and its surroundings, you should definitely buy this official guide. Recommended]