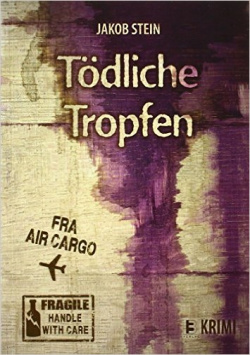 Chief Commissioner Schwaner is back in action! Just in midsummer, when one heat record after another is broken, Schwaner has to investigate a particularly cruel murder case. The body of a woman cruelly disfigured by the enormous heat is found at Frankfurt Airport. First of all, there is no evidence of the identity of the dead. But then the investigations lead to first successes and the trace leads into the world of noble wines up to the monastery Eberbach. But the dead woman was actually killed because of a few bottles of expensive wine?

"Tödliche Tropfen" is Jakob Stein's third thriller about Frankfurt's Chief Inspector Martin Schwaner. After the Kleinmarkthalle and a discount store in Nieder-Erlenbach, this time Frankfurt Airport is the main venue. And that proves to be a very good decision. Because the investigations in the cargo area offer the reader an exciting look behind the scenes of the city in the city. Even though the story is fiction, it offers some fact-based information about the work of the federal police or fire brigade at Frankfurt Airport, which adds a special spice to the exciting case.

Besides the parts of the novel that take place at the airport, the rest of the book is, of course, also infused with a lot of local color. Here Stein is much more reserved with descriptions of places than was the case, for instance, in the first book. The result is a much more atmospheric picture of Frankfurt, which does not seem as troubled as it might have seemed at first glance. Stein also leaves room for the familiar figures to develop. This is especially true for the relationship between the Chief Commissioner and the forensic doctor Sandra Thielacker, who meanwhile seems very authentic with all her ups and downs - especially when great heat, fatigue or an offended ego after a collapse cause tension.

"Deadly Drops" is exciting and extremely entertaining reading that can be devoured on a few evenings. An entertaining Frankfurt thriller that has chosen very effective locations not only for the airport, but also for the wine cellars at Eberbach Monastery or the city scenery groaning under the summer heat. Those who already liked the first two Schwaner crime thrillers should definitely take a look here. Recommended]