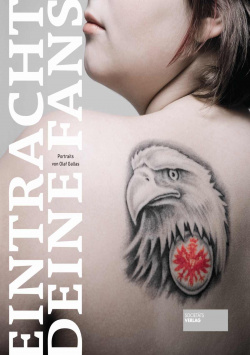 "Nie mehr 2. Liga", the fans of the Frankfurt Eintracht sang after their successful promotion to the first Bundesliga in the 2005/2006 season. Unfortunately, as is well known, this wish was not fulfilled and last season the club crashed again into the second league. And the fans? They were sad, disappointed - but still remained loyal to their favourite club - and with all their heart. Because even if Frankfurt Eintracht has to struggle with various failures again and again, the fans can always be relied on. Reason enough to set a small monument to them, which has now been realized in the photo book "Eintracht - Deine Fans" by the photographer Olaf Gallas in a very interesting way.

After a short greeting by Nils Bremer, editor-in-chief of the Journal Frankfurt, and two sympathetic prefaces by Henni Nachtsheim ("Badesalz") and Axel "Beve" Hoffmann, who spoke at the stadium for many years, 85 completely uncommented portraits follow, in which the photos often say more about the fan's love than long treatises could. The 85 fans let their faces, their clothes, their accessories or their body painting speak of a few small quotations that can be read after the photos.

The special thing about the people portrayed is that, as different as they may be in age, gender, attitude, appearance or origin, they all share a love for their football club and turn this colourful group into a harmonious community. The love of harmony is expressed in very different ways. While the fan Richard, for example, appeared at the shooting with a feather coat according to the mascot of the club, or Helga, even though she is no longer a younger student, still proudly wears her Eintracht shirt, Manfred "Adi" has not let it be taken to dedicate a prominent place on his tattooed upper body to Eintracht. The pregnant Sabine already makes sure that the offspring becomes a Eintracht fan, which was obviously also the case with little Luca. At least the little fan wears his Eintracht outfit full of pride - to the delight of his proud dad. And also the outfit of the faithful followers Heike and Michael is a real eye-catcher.

"Eintracht - Deine Fans" is a book by fans about fans for fans. A beautiful illustrated book that captures the unifying love of a football club in beautiful portraits. And even if the achievements of the club are not always at the highest level, a glance at these many different people, connected by their passion, is enough to make you want to join this community and cheer the guys from Frankfurt Eintracht back into the first league.