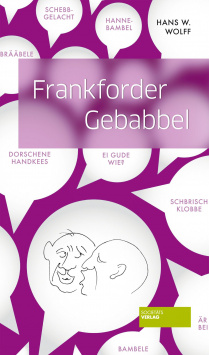 While nowadays one uses rapped rhymes, self-made YouTube videos or SMS messages to express one's feelings, the high art of poetry was chosen for it in the past. A declaration of love was always particularly effective when it was presented in an elegantly constructed verse form. Such a declaration of love did not necessarily have to be addressed to one person. Many poets have also expressed their love for a city or a country in verse form. Hans W. Wolff joins this in his book "Frankforder Gebabbel" in a charmingly humorous way. But of course he does not leave it to a single ode to Frankfurt. Rather, he finds the right rhyme for all aspects of life in the Main metropolis, packs the lovable qualities of Frankfurters into well observed verses and then puts the readers' knowledge of their hometown to the test - and of course also in verse form.

Whether about the "Sexy Mainhattan", a typical "Frankforder Weekend", the "Rüsdische pensioner in a Schdadtpack" or about passionate "Fiddnessgeeschner", Wolff travels through Frankfurt on his amusing verses and thereby reveals a very precise power of observation. As a reader, one recognizes many things that one has once observed in oneself or in other Frankfurters, which of course significantly increases the entertainment value of this collection.

It becomes interesting when Wolff tests the knowledge of his readers about Frankfurt in ten rhymed questions. You don't have to be a long-established Frankfurter to answer these amusing questions. Even for all "plagued" people, the illustrations alone make it easy to find the places they are looking for. But what makes this part of the book so successful is the charming way in which well-known and popular places are described, which are not only humorous, but also convey a little bit of city history.

With "Frankforder Gebabbel" Hans W. Wolff shows similar to "Herzhaft Hessisch" or "Bald kimmt`s Christkindsche!" again his love for dialect and Frankfurt and the whole of Hessen. In the play with language he shows a wonderful self-irony, which reveals many a quirk of the Frankfurters without exposing them. His book is not cynical or condescending, but simply pervaded by very charming humor. Sometimes that sounds a little rough, but at the core it's very cordial - just like the people of Frankfurt! Recommended]