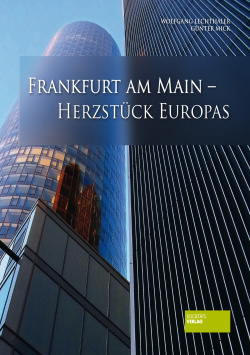 Frankfurt am Main - the heart of Europe

Even though Frankfurt is only a megacity during the day thanks to the many commuters and is almost a village after work in some parts of the city, the city occupies a central position not only within Germany but throughout Europe. The skyline, the financial centre, the airport, the trade fair centre or the railway station are features that make Frankfurt a "heart of Europe". However, the city, so often called Main Metropolis, has not only been playing this role for a few years. Rather, it is a decisive part of Frankfurt's history, which Günter Mick conveys in an entertaining and interesting way in his texts of the book "Frankfurt am Main - Heart of Europe".

In the first part of the illustrated book, which has now been published as a beautiful new edition, Mick takes the reader on a journey through Frankfurt's history, underlined by Wolfgang Lechthaler with his photographs of the modern "Mainhattan". In the second part of the volume, some of the city's striking, significant and historical places, as well as their festivals and culinary sides, are illuminated in more detail in words and pictures. Whether Zeil, Dom, Römer, Palmengarten or airport, whether Museumsufer or Dippemess, whether Skyline or Altstadt, whether MyZeil or Goethehaus, the different facets of the city were captured here in a very engaging way.

Wolfgang Lechthaler has captured some very atmospheric pictures with his camera, which show Frankfurt from a very appealing, sometimes even for connoisseurs somewhat surprising, but always very attractive perspective. Admittedly, when you walk by countless construction sites, demolished houses or houses that have been disfigured in some way, it is sometimes difficult to appreciate the beautiful sides of the city. "Frankfurt am Main - Heart of Europe" recalls in a way that is well worth seeing and reading that there are many of them and that they have a decisive influence on Frankfurt's position within Europe. A really beautiful book that can be warmly recommended to all Frankfurt lovers and all who want to become one!