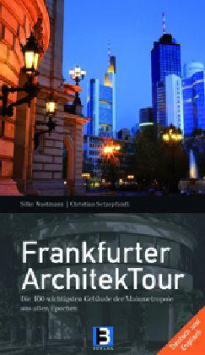 Frankfurt architecture is extremely interesting due to the contrasts between old and modern that can be observed everywhere. Each epoch has produced very special buildings, the one hundred most important of which were brought together in the book "Frankfurter ArchitekTour" by Silke Wustmann and Christian Setzepfandt. The buildings are presented with short texts (in German and English) and appealing photos. The result is a very nice overview of the versatility of the Main metropolis, which can also be explored in six thematic city tours.

The presented tours lead the reader along the museum bank, into the Höchster Altstadt, to Sachsenhausen, into the world of Frankfurt classicism, across the city centre or to selected features of Frankfurt architecture. Although the accompanying texts are relatively short, it should be noted that the authors know what they are writing about. No wonder, since Silke Wustmann is a historian and city guide and Christian Setzepfandt an art historian and long-time organizer of guided tours in and around Frankfurt. Both of them know the metropolis on the Main with all its peculiarities and share their knowledge here in a compressed and very entertaining way.

That's what makes this city guide so worth reading - for old-established Frankfurters as well as for outsiders. Surely, with the relatively limited selection for many readers there will certainly be one or the other building that is missing in the list and actually should have belonged in this book. But overall the compilation of the two authors is comprehensive, varied - and simply successful. Absolutely recommended!