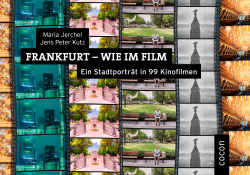 Frankfurt - As in the movie

Doesn't this bank look like the one Forrest Gump was sitting on? And doesn't that old wall remind you a little of Robin Hood? What would it be like to stage places in Frankfurt in such a way that they recall moments from great Hollywood films? This is how Maria Jerchel and Jens Peter Kurz came up with the idea of staging a somewhat different city portrait of the Main metropolis. Both of them intensively searched for films from all genres and epochs that could be staged somewhere in Frankfurt. This was followed by a no less intensive search for suitable locations - whether well-known sights or quite "banal" places of everyday life. And then they took a lot of pictures, in many cases the right weather had to be adjusted in order to get exactly the picture the two of them had in mind.

The pictures were then edited on the computer and finished was "Frankfurt - Wie im Film" - A start portrait in 99 movies. If you leaf through the book, some references are obvious, of course. King Kong on the Messeturm or "Jurassic Park" at the Senckenberg Nature Museum. But there are also numerous pictures, in which the reference to the movie is wonderfully thought around the corner and which actually allow us to see the city with completely different eyes. Especially for film lovers it is really wonderful how Maria Jerchel and Jens Peter Kurz have transformed well-known city views into great cinemas with fantasy, a good eye and a love of detail.

When viewing the book for the first time, the left page should always be completely covered and only the image should be viewed. Not only your own film knowledge can be tested in this way. It is just as much fun to guess which places in Frankfurt have turned into the futuristic world of "Blade Runner", into the "Yellow Brick Road" sung of by Elton John from the "Wizard of Oz" or into the great hall of the Hogwarts School of Magic from "Harry Potter".

A book made with a lot of love and passion, after reading it one really walks through the city with a completely different view. A wonderful tribute to the cinema and to our beautiful city. In the end there's only hope that the "Transformers" or the Marshmallow Man from "Ghostbusters" won't really stomp through the canyons of Frankfurt one day - and that there might be more of these original city portraits to see sometime!