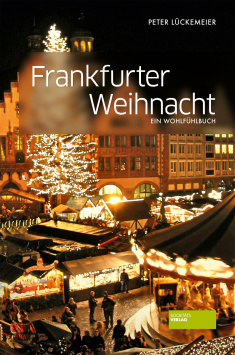 What's it like in the 1963 Christmas song: "It`s the most wonderful time of the year". Yes, Christmas is actually the best time of the year for many people. If one walks through the Main metropolis in the weeks before the festival and especially over the Christmas market on the Römerberg, then it is almost impossible to escape the magic of this very special time. But Christmas is of course much more than mulled wine and flashing lights. There are many different elements that make you feel so at home during the weeks around the festival. Music, the scent of cookies, atmospheric stories and poems or even a good portion of nostalgia. All this is now available compressed as a book.

In "Frankfurter Weihnacht", FAZ local chef Peter Lückemeier has collected atmospheric pictures, several stories from the FAZ archive, recipes, dialect poems and much more to create a real feel-good book. The result is sometimes contemplative, sometimes tasty, then again amusing or going to heart. The "Christmas story uff Hessisch", for example, invites you to smile, while the diary entries of a Swiss student from 1921 are more likely to give you goose pimples. In contrast, lists of the most popular Christmas carols in Hessen or the highest temperatures on Christmas Eve since 1900 are completely objective. And of course Goethe should not be missing from a Frankfurt Christmas book.

The book is not only characterized by its enormous variety of contributions, which make it difficult to put the book out of hand once you have started reading. It is above all the loving work that has obviously been invested here in researching and compiling the individual texts, poems, recipes, letters or newspaper reports. Peter Lückemeier has thus created a book that is as entertaining as it is interesting, that lets the reader feel the comforting warmth of the Christmas season, but also makes him think now and then. In addition, he manages on the one hand to indulge in nostalgia, but at the same time to build a bridge to the here and now.

"Frankfurter Weihnacht" makes it clear what Christmas meant to the people of very different generations in Frankfurt and how this meaning was able to assert itself against the many changes that Frankfurt has experienced in the course of time and against a society that is changing even faster. The perfect companion through the festive season, which more than deserves the nickname "A feel-good book". Absolutely recommended!