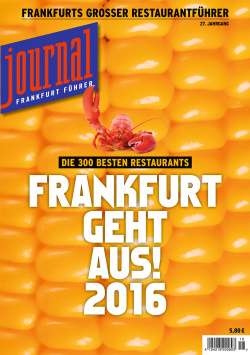 Over 1.3 million copies sold, 6706 written reviews on 5300 pages, for which 16094400 calories were recorded by the testers in about 13412 hours - these are figures that stand for the success story of "Frankfurt geht aus", the great restaurant guide of the Journal Frankfurt. A success story that is already entering its 27th year. For more than a quarter of a century, many readers have trusted the opinion of the restaurant guide's testers, and restaurants have been particularly proud of it for just as long when they have achieved 1st place in one of the categories in the magazine.

The 2016 issue continues in the usual manner. As usual, the best restaurants will be presented in the form of Top 5 rankings in various categories. In addition to various national cuisines from Italy to Japan, Greece, Vietnam, Africa, Austria to the USA or India, Frankfurt's favourites, the best new openings, the most popular cider bars or even the winners in the area of home-style cuisine are also chosen. Ice cafés, trendy bars, food trucks and pizzerias are also evaluated. After a brief look at the culinary downsides of the city in the flop 5, the more detailed discussions of the localities follow in alphabetical order, although the winners of the individual categories are given a little more space.

The discussions are attractively written and usually come very close to the truth. Of course, some aspects are literally a matter of taste. Where a journal tester might get into raptures, others don't taste anything special. On the other hand, some visitors find something tasty or charming, which is mercilessly failed by the testers of the magazine. Nevertheless, it can be positively noted that where appropriate, praise is given, and justified criticism is not spared, even among the favourites. This prevents the reader from visiting one of the restaurants presented with false expectations. If the food is good, but the service is rather modest, if the price-performance ratio is not right despite culinary delights, or if the ambience leaves something to be desired, then this is mentioned in the discussions just as much as the reasons that made sure that a locality made it into the top 5 in its category.

Positive is also the fact that locales that ended up in the flop 5 in the past are given a second chance. In fact, some of the disappointments of the past have been marked by a marked improvement. And it is only fair to mention something like this in praise, so that the efforts of the operators are rewarded with a possible increase in the number of visitors.

On 266 pages "Frankfurt geht aus" (Frankfurt goes out) proves again in the 27th year why the restaurant guide is so popular with Frankfurters and why many rely on the reviews in this issue. With lots of nice tips, a selection of worthwhile event locations, the favourite restaurants of Frankfurt celebrities or a look behind the scenes at the Genussakademie, "Frankfurt geht aus 2016" has once again become an entertaining and helpful magazine, which you can buy immediately in well-assorted book and magazine shops or at Http://www.journal-frankfurt.de//service_shop_sonderhefte_einzel/3. Recommended]