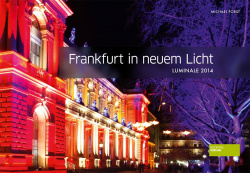 Frankfurt in new light - The Luminale 2014

2014 Luminale, the biennial of lighting culture, was the seventh time that Frankfurt has been transformed into a fascinating work of light art at night. Around 180 projects in the entire inner city area, as well as in Offenbach, invited you to marvel, stroll and dream. Hotspots for the seventh Luminale included the main station, the banks of the Main, the Naxoshalle, the new Osthafenbrücke bridge and the Palmengarten. No wonder that with the unique motifs created by the light installations, many professional and amateur photographers were on their way to capture "Frankfurt in a new light". Some really wonderful pictures were created, of which a selection has now been published as a handy illustrated book.

The whole thing was documented by Michael Frost, who regularly deals with the subject of photography for the Frankfurter Neue Presse. The book starts with introductory texts by Frankfurt's Lord Mayor Peter Feldmann and Head of the Department of Culture Dr. Felix Semmelroth, as well as interviews with FNP photographer Christian Christes, who also reveals some helpful tips for amateur photographers, amateur photographer Volker Keller, the winner of the big photo competition, and with Luminale curator Helmut M. Bien. The interviews with Christes and Keller in particular are really interesting and are a perfect addition to the picture section of the book, especially for amateur photographers.

However, the focus of "Frankfurt in New Light" is clearly on the many great Luminale photos, which are presented on almost 140 pages. After the winning pictures of the photo competition, the book will cover the individual stages of Luminale 2014. From the view of Frankfurt's skyline, the path leads past the main railway station, the participating churches and museums, to the stock exchange, the Literature House and the Palm Garden. Through different perspectives and lenses, through the play with colors and exposure time, a really fascinating kaleidoscope of impressions emerges, which not only emphasize the beauty of Frankfurt, but also reveal the beauty of an art project like the Luminale.

The way in which here not only the skyline and its skyscrapers, but also squares, old buildings or more unusual places such as the interior of a ship are used as projection surfaces for light art is truly unique. This is very difficult to capture even with the best cameras. But even if they cannot reach the very special atmosphere of a real visit to the Liminale, the pictures collected for this book make the special nature of the festival very noticeable. The book is also a testimony to the enormous fascination that photos can exert on the viewer. So "Frankfurt in New Light" is certainly not a replacement for Luminale, but a good addition and the perfect way to shorten the waiting time for the next Festival of Light Art in 2016. Absolutely recommended!