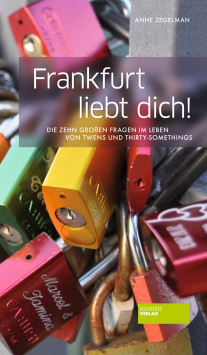 In a city like Frankfurt there are actually dozens of opportunities every day to meet new people. Especially for singles, there is a wide range of single parties, speed dating and similar events that should bring lonely hearts together. And yet it is extremely difficult to find the right one, especially in a big city. But why is that? Are the demands too high? Or can love simply not be forced - especially not in single-oriented nightlife? In her book "Frankfurt loves you! Anne Zegelman analyses these and other important questions in the lives of Twens and Thirty-Somethings in the big city.

Inspired by real life, the whole thing is a fictional blog-style lifestyle novel, often reminiscent of a Mainhattan version of "Sex and the City". Even though some of the desires, longings and problems Anne Zegelman addresses here are gender-overlapping, the book as a whole is clearly aimed at a female readership. For as a man it is sometimes a bit difficult to really understand some of the thoughts, especially with regard to the idea of the ideal partner.

The very relaxed and at times pleasantly ironically written texts are accompanied by beautiful pictures captured by the photographer Robin Kehl. He has often staged the student Deliah Eckhardt at well-known places in Frankfurt in such a way that it usually goes well with the respective text passages. This is where the book, apart from its title, has the clearest reference to Frankfurt. Some locations are mentioned again and again, so that one never forgets that the history takes place in the Main metropolis. But overall the name Frankfurt could also be replaced by any other big city, since the "ten big questions in the life of Twens and Thirty-Somethings" are rather universal in nature and not Frankfurt-specific. Because not only here many single women ask themselves how to find the right man, when it really is love and when it's just sex, why they should get married in our times, which status symbols are really necessary and how much egoism is healthy in a relationship.

Even if it's not explicitly about Frankfurt in spite of the title, "Frankfurt loves you!" is an entertaining novel in its casual way, which for some women perhaps even has downright advisor qualities. Taken directly from life, written with a wink and charm and therefore altogether also: Recommendable!