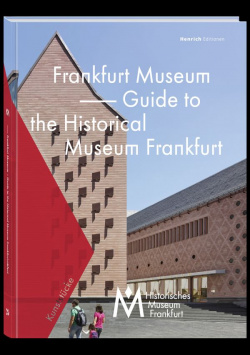 Ten years have passed from the architectural competition to the opening of the new Historisches Museum Frankfurt. Through the renovation of the old building and the planning and construction of the new building, the museum was not only extended by a large area. The orientation and thus the structure of the permanent exhibition have also been completely redesigned. The result is a "Frankfurt Museum", which is exciting and extremely entertaining to discover for citizens of the city as well as for tourists.

On the occasion of the opening of this city museum, several publications have been published dealing with different parts of the museum, such as the snow globe or the library of the elderly. But there is also a general work that serves as a perfect guide through the museum. The book deals with the history of the museum as well as with the new building. The individual parts of the building are presented before the reader is guided through the permanent exhibitions. The interesting text contributions and numerous illustrations illustrate not only the advantages of the new museum architecture, but also the versatility of the museum's offerings.

The contributions are informative and not written too overflowing. Not only the different thematic fields of the permanent exhibitions will be presented in detail, but also highlights of the exhibited objects. A lot of background knowledge is conveyed in a pleasantly clear form, which makes you want to visit the museum again with the newly acquired knowledge.

Because as good as the book is made, it is only a supplement, not a substitute for the actual visit to the exhibition. Because the really successful museum architecture in connection with the partly very old or simply beautiful exhibits can be described in a book, but not really experienced. As a companion or also as a testimony of the successful reorientation of the museum, the book is absolutely recommendable!