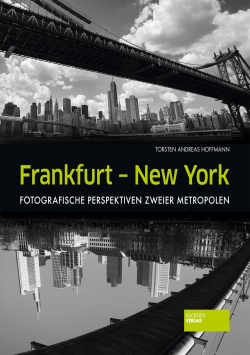 Frankfurt is also called "Mainhattan". Anyone who has ever been to New York will certainly have to smile a little about this comparison at the latest when entering Manhattan. At first glance, the "Big Apple" and the Frankfurt skyline have relatively little in common. Frankfurt simply can't compete with the size of New York, even though we have some really impressive buildings here that make the cityscape unique, at least in Germany. But on closer inspection there are some surprising similarities between the two metropolises. And the photographer Torsten Andreas Hoffmann took a closer look. His illustrated book "Frankfurt - New York", which has now been published in a fourth, extended edition by Societäts Verlag, shows these parallels, but also the differences between the two cities, in a remarkable, entertaining and sometimes pleasantly ironic way.

Hoffmann compares the smallest and largest metropolis in the world on a double page. On one side is the famous Wall Street, on the other the less popular Wallstrasse, on the left the Statue of Liberty on Liberty Island, on the right the Statue of Liberty as an advertising figure in a telephone shop in Frankfurt. On one side the aggressive bull in front of the New York Stock Exchange, on the other the calmer, more proud bull in front of the Frankfurt Stock Exchange. The facades of two Starbucks cafes in the Big Apple and Mainhattan, on the other hand, are almost indistinguishable. And also the relaxing cigarette in between is enjoyed very similarly in both cities.

A look into the subway stations, majestic high-rise facades, the view from the Maintower and the Empire State Building, the Schirn and the Guggenheim Museum, the new Osthafenbrücke in comparison to the Brooklyn Bridge - Hoffmann has captured landmarks of the cities as beautifully as less well-known, less picturesque places. The numerous black-and-white photographs not only draw an extremely impressive picture of Frankfurt and New York, they also capture the lively life of both cities perfectly. The city that never sleeps on one side, the city that seems to sleep quickly after work, on the other.

It is precisely the differences that are so obvious despite all similarities that make this beautiful illustrated book so appealing. The fact that the comparisons do not always come without irony is another good reason to put this beautiful declaration of love to two unique cities on the bookshelf. Absolutely recommendable!