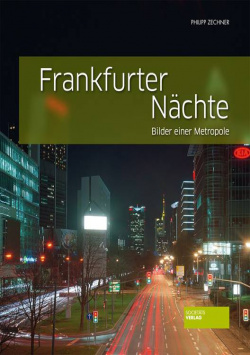 Frankfurt Nights - Pictures of a Metropolis

As much as many Frankfurters like to see their city as a small New York - Mainhatten -, it becomes clear just at night that Frankfurt, despite its impressive skyline, is quite different from its big American brother. While the Big Apple was not sung about by Frank Sinatra for nothing as the city that never sleeps, the disappearance of the numerous commuters to the suburbs and the curfew in the clubs and pubs in Frankfurt's city centre bring peace to the city centre. In his book "Frankfurter Nächte", photographer Philipp Zechner tried to capture the fact that Frankfurt radiates a certain fascination even at night.

It would have been easy to concentrate only on the shiny, really photogenic sides of the city and especially to focus on the illuminated skyline, which of course is a particularly impressive motif at night. But that's not exactly what Zechner does. Of course there are such skyline pictures, because after all, the skyscrapers contribute considerably to the very special position that Frankfurt holds not only in Germany. They are the unmistakable trademark of the city, and Zechner knows how to appreciate this in his pictures. Nevertheless, his focus is on the sides of the city that make Frankfurt so special for the people who live here. The mixture of tradition and modernity, of the original and the transient, of the provincial and the international, which shines in a very special light at night.

Philipp Zechner has captured simple house fronts, walls sprayed with graffiti, small alleys, streets where bulky waste piles up or illuminated industrial buildings, but also shop windows, snack bars and historical landmarks with his camera in a very special atmosphere. This can look wonderful, like the view into the Saalgasse or the walk through the sparsely lit Klappergasse in Sachsenhausen. Other pictures almost radiate something uncomfortable, such as the dreary entrance to an underground car park in the city centre or the grounds at the Europaturm. Still other places in their nightly inanimateness seem downright strange, even if you have passed them hundreds of times during the day.

"Frankfurter Nächte" does not always show the Main metropolis from its best side. But even when the pictures show garbage, dark corners or unsightly concrete blocks, they radiate something of what makes the city so fascinating at night. The mixture of attractive sights, the impressive skyline and the dark corners make this nocturnal ramble through Frankfurt a very special illustrated book in which the city shows itself to connoisseurs from an unusual and perhaps even completely new side. Absolutely recommended!