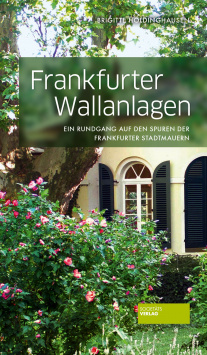 A walk in the footsteps of Frankfurt's city walls

When you think of Frankfurt, you usually first think of the skyline, the high bank towers, the Zeil, the trade fair or the airport. Perhaps also to the cathedral, the Römer and the Museumsufer. Admittedly, all these are places and landmarks that characterize Frankfurt not only in their appearance. But the small metropolis on the Main is also an extremely green city with many parks, avenues and of course the Wallanlagen, a ring-shaped green area around the Frankfurt city centre. In her book "Frankfurter Wallanlagen" Brigitte Holdinghausen invites you to an interesting, informative and entertaining tour through this recreational area. Here, where the city's medieval city walls once ran, there are now children's playgrounds, monuments, ponds, old trees and numerous other sights, all of which are presented in this beautiful book.

To begin with, Holdinghausen presents the route that leads from Römerberg first to the banks of the Main to the Literaturhaus and from there to the Obermainanlage. From there it goes over the Friedberger Anlage - with a detour into Bethmann Park - and the Eschenheimer Anlage to the Bockenheimer Anlage, which in turn leads to the Taunusanlage and over the Gallusanlage to the Untermainanlage, which then leads along the Main back to the Römerberg. Afterwards, the reader can go on an extensive walk that not only describes the individual sights along the way, but also makes a detour to special features off the ramparts. The book also repeatedly plunges into the history of certain places such as the Alte Oper, the Kasematte, the Alte Brücke or the Märchenbrunnen.

This way you can find out all sorts of interesting facts about what may have remained hidden while strolling through the ramparts. A few beautiful photos accompany this walk through today's and historical Frankfurt, which intensifies the desire to walk this path with the newly acquired knowledge. So the book is not only an entertaining declaration of love to one of the particularly beautiful sides of green Frankfurt, but also an exciting journey through the history of the city. And that makes this richly illustrated tour then also an absolutely recommendable reading for all Frankfurt lovers!