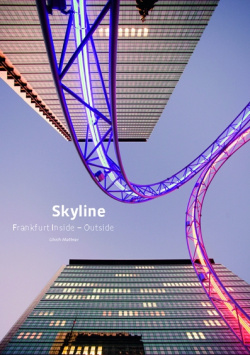 Frankfurt Skyline Inside - Outside

The fact that the Frankfurt skyline is impressive and so unique in Germany is probably already known. Pictures from the view to the skyscrapers already exist like sand at the sea. It is therefore also extremely difficult to gain new facets from this familiar sight. But Ulrich Mattner has this difficult task in his illustrated book "Frankfurt Skyline: Inside - Outside" was mastered impressively.

The photographer not only captured the facades of the modern towers in sometimes very engaging perspectives. He also takes a look into the skyscrapers and a look out of them. He succeeded in creating some great images, such as the view from the boardroom on the 49th floor of the Commerzbank Tower to the Main metropolis, the sun-drenched Sky Lounge in the BHF Bank Tower or a cross-section of the hustle and bustle in the Skyper skyscraper. The wellness area of the Radisson Hotel makes you want to check in immediately at the hotel, which is as eye-catching as it is unique due to its round shape, and the Gallileo Tower, which is illuminated at night, radiates a truly fascinating atmosphere.

Some of the photos, with their rather washed-out look, take a little getting used to at first, but in the overall context they also contribute to the sometimes very fascinating atmosphere of the book. The mixture of extensive views of the skyline and almost intimate insights behind the facades of the skyscrapers makes this noble illustrated book a real recommendation for every lover of Frankfurt. Because one thing is guaranteed: you have never seen the Frankfurt skyline like in this book!