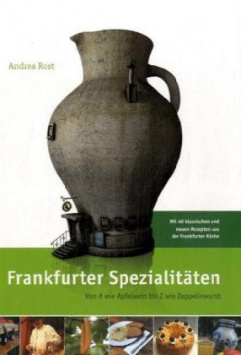 While browsing through this really very special cookbook, one may first get the impression that this work must have been written by a real Frankfurt woman. But that's not the case. Andrea Rost was actually born in Vienna, but after she found her great love in Frankfurt, she soon discovered a love for Frankfurt's gastronomy. And that gives them more than convincing expression in this book. Even old-established Frankfurters can still learn something about their city, the food and its history here.
>
>Rust is extensively devoted to the role of the apple in Frankfurt cuisine, the Frankfurt cult drink, cider, everything worth knowing about green sauce (including the famous variant by Gisela Paul), the theme "Worscht" and of course the sweet sides of Frankfurt cuisine. Not only are recipes arranged in a row, but the reader is also provided with a lot of interesting background information, which makes browsing through the book a very special pleasure. The whole thing is refined with many pictures showing the culinary Frankfurt in all its diversity.

It is especially nice that besides special locations like the Apfelweinmuseum, the Töpferei Maurer, the Kleinmarkthalle or the Café Wackers at the Kornmarkt, also the dates of the Frankfurt weekly markets, as well as addresses and internet presence of some selected Frankfurt restaurants and bars are listed. Not only can all the ingredients for the preparation of the recipes be found unerringly, it also enables the reader to immediately find the right place where the Frankfurt specialities presented here can be enjoyed.

"Frankfurt specialities" is more than just a cookbook. It is also a loving homage to the city and its culinary culture. And exactly for this reason this book is absolutely recommendable!