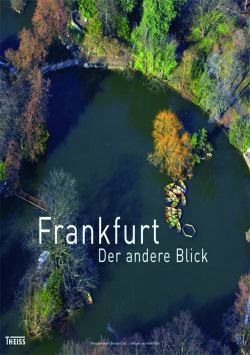 Frankfurt. The other view

illustrated books about Frankfurt there are many as you know. Some of them show the Main metropolis also from rather unusual perspectives and from sides which are not known to everyone. And yet a book has now been published which succeeds in taking an unusual look at landmarks, districts, landscape and skyline, which, together with the accompanying texts, combine to form an engaging declaration of love to Frankfurt.

The title "Frankfurt. The other look" is truly the program here. For the pictures captured by Christian Grau with the help of pilot André Risto show "Mainhattan" from a bird's eye view, a view that most people have been denied so far. Even long-established Frankfurters may never have seen the "Ginnheimer Spargel", the Roman, the fair, the snow-covered central station, the Eschersheim Tower, the Commerzbank Arena, the airport or the red light district as they are shown here. The skyline at sunset, the streets of the city centre filled with sports enthusiasts, the summer museum shore or the Frankfurter Kreuz traffic junction are further motifs worth seeing in this beautiful illustrated book.

The pictures are framed by texts by native or elected Frankfurters such as writer Eva Demski, Schirn- und Städel-Direktor Max Hollein, TV presenter and actress Sybille Nicolai, banker Friedrich von Metzler, Peter Possmann or former concert promoter Fritz Rau. But doctors, entrepreneurs, lawyers, a restaurateur and a student also have their say here, as does the former professional footballer Charly Körbel. The selection of authors and their amounts is as varied as the cityscape.

Mal times factual and informative, sometimes very personal, amusing and creative, these short texts also provide a nice overview of life in and love for Frankfurt. And even if there are always moments in everyday life in the big city when you can curse about the city and even if there are places in Frankfurt that are hard to love, especially in uncomfortable weather, Frankfurt is in the end exactly what this book worth seeing and reading conveys: a versatile city full of charm, beauty, but also with corners and edges. Absolutely recommended!