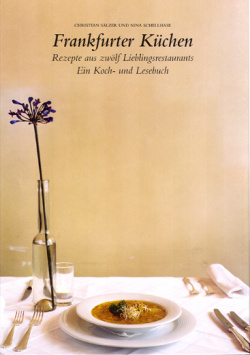 Culinary Frankfurt can be approached in many ways. For example, it is possible to concentrate fully on typical Frankfurt specialities. Or you can celebrate the cultural diversity of the Main metropolis, which is also reflected in the culinary sector in a pleasant and extremely tasty way. The book "Frankfurter Küchen - Rezepte aus zwölf Lieblingsrestaurants" uses exactly this approach. The two journalists Christian Sälzer and Nina Schellhase, together with chefs and chefs from twelve selected restaurants in the city, have put together a work that is much more than just a collection of recipes. Twelve cuisines that couldn't be more different, their philosophies and their most beautiful recipes make the book a very special pleasure - for the eye and the palate.
>
The following are represented: Alexis Sorbas from Niederrad, Bockenheimer Andalucia, flowers from Nordend, the dining room in Westend, Sachsenhäuser Feurrädchen, Größenwahn in Nordend, Indigo from the railway station district, Rödelheimer La Fenice, Maasachanz from Sachsenhausen, the no. 16 From Bornheim, Rama V from downtown, and Schandis from Nordend. Filled with pictures from these restaurants, stories about culinary Frankfurt and very appealing photos of the selected recipes, the book manages to transport a touch of flair and charm of the respective restaurants into the readers' own four walls. Great praise is therefore due not only to the authors of the texts, but also to the photographer Michael Hudler and all the others who worked on the book.
>
Over 100 recipes include the TSIPOURA (Dorade mit Oliven-Zitronen-Marinade auf mediterranem Gemüse) from Alexis Sorbas, the GAMBAS AL AJILLO (prawns in garlic) from Andalucia (one of the most delicious starters in all of Frankfurt!) and the GAMBAS AL AJILLO (shrimps in garlic) from the GAMBAS AL AJILLO.), the BIG POTATO CLOSE WITH LIVERWURST FILLED ON SAUERKRAUT from the fire wheel or the mango cream MALAI AM from indigo. It is this diversity that makes up the book, which is not without reason one of the winners of the GOURMAND World Cookbook Awards.

Whoever would like to take a very special culinary tour through Frankfurt and then continue this at home, simply cannot get past this very lovingly and attractively designed book! Not only for Frankfurters a real recommendation!