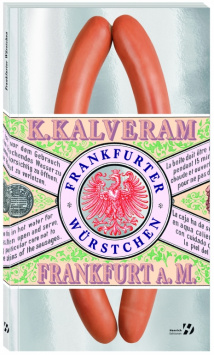 For a long time they were THE culinary flagship and probably the most popular export product of Frankfurt: the popular Frankfurter Würstchen. Not only in Hesse, but in the whole of Germany and even in the USA or Spain, the Frankfurt sausage established itself as a coveted delicacy and was sold like hot cakes to customers. After the Frankfurter sausage has become calmer in recent years, not least because some companies are of the opinion that the differences to the Wiener sausage are too small to really be noticed by consumers, the once also called coronation sausage delicacy has recently celebrated a small comeback. More and more artisan butchers have taken up the traditional sausage again in their assortment and give the Frankfurt sausage with different nuances in seasoning and production their very own touch, which ensures a pleasant versatility in the offer. Not only the jury of the "1st Frankfurter Würstchen-Castings" in August 2012 could get a tasty picture of this.

In his book "Frankfurter Würstchen" Konstantin Kalveram pays tribute to the Frankfurter Würstchen in an informative and entertaining way. Kalveram leads the reader not only through the history of the Frankfurt butchers' guild and the history of the Frankfurt sausage, in the course of which deliciousness was repeatedly exposed to a constant change in preparation and production. The book also offers some tasty recipe ideas that show how versatile this local speciality can be. Whether Frankfurt potato salad, Frankfurter in a cabbage wrap, sausage carpaccio, apple-potato foam soup or the variations of the crispy sausage, lovers of the Frankfurt sausage will find here many suggestions to enjoy the delicacy in a new way.

Kalveram concludes his book with a list of butchers who produce and sell Frankfurt sausages themselves. The culinary excursion into the history of Frankfurt, in which it is also revealed where the Kunsthalle SCHIRN gets its name from or where the differences between the allegedly similar Frankfurters and Viennese lie, is pleasing with its interesting, entertainingly written texts and the numerous illustrations, which additionally illustrate how popular the Frankfurt sausages once were. A beautiful reading and enjoyment book about "one of the most beautiful trivialities of the city", which you can not only enjoy as a lover of Frankfurt sausages. Recommended]