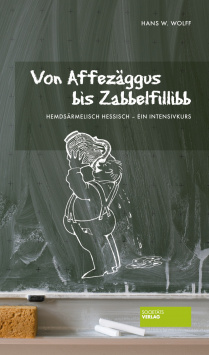 Do you know what a "Hannebambel" is? Do you live in a "Kabäusje"? Do you also like to make a "Niggersche" or treat yourself to a "Guudsjer"? If you live in Hessen or want to visit the region and don't know any of the words, then you should definitely take an intensive course in Hessian. Good that with ?from Affezäggus to Zabbelfillibb? now the perfect aid for learning the most beautiful dialect of the world came into the trade. The second and extended edition of the 2007 for the first time published book of the linguist Hans W. Wolff brings the reader in affectionately amusing kind the hessian dialect more near. On the basis of smaller texts, many examples and helpful tests, interested readers can refresh their rusty knowledge in "babbling" as well as take their first steps towards the perfect Hessian. The fact that this intensive course proves to be so amusing is due to the loving implementation of the book, which is reflected in particular in the small "Geschischdscher". With a lot of wit and charm, Wolff tells about conversations at the "Sennjohrndisch" about the "gude alde Zeit", introduces "Viescher wo rumfliesche", travels with the reader to the Wedderau and clarifies "Eigeplackte aus alle Ecke von de de Welt" about whether the national drink of Hesse is called Ebbelwei or Abbelwoi.

Who wants to test whether the book has a certain learning effect in addition to good entertainment will be offered some intermediate tests. Readers then have to solve tasks such as "Wenn Viescher en lange Rissel hawwe sinns..." (If Viescher en lange Rissel hawwe sinns...) or guess a professional group from Offenbach or find out which crime series can be described as "besonners langleewisch" (besonners langleewisch).

The whole thing is then garnished with illustrations by Ludwig Nardelli. "From Affezäggus to Zabbelfillibb" is an extremely amusing, but also endearing book, which takes its task very seriously, but conveys the subject matter playfully and with a charming wink. A book that is at least as entertaining for die-hard Hessians as it is for readers who already have problems pronouncing and understanding the book title. Absolutely recommended!