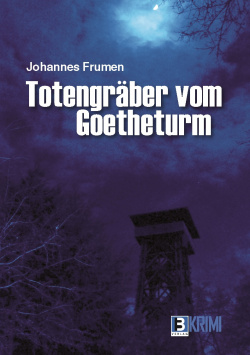 Frankfurt in 1979: the strangely masked bodies of two drug addicts are found on a bench at the Goetheturm. Suicide? A simple drug death? Or a ritual murder? The investigation of the case is causing prosecutor Martin Flamme sleepless nights. Again and again, the investigations come to a dead end. Actually, Flamme has enough on his plate with these two dead people. But then he gets a very special case of damage to his reputation on the table. Two completely different cases, but they have more in common than it initially seems.

"Totengräber vom Goetheturm" is already the second novel by Dr. Harald Hans Körner alias Johannes Frumen, in which public prosecutor Martin Flamme takes centre stage. Körner, who himself worked for the public prosecutor's office in Frankfurt for 40 years and was primarily responsible for drug offences, deals with real cases from his professional life in his books. Today he presented his new work at the foot of the Goetheturm. The crime thriller focuses on a case of character assassination, which in the 70s attracted a lot of attention not only in the regional media. The author has developed these into an exciting thriller with set pieces from other cases. Names and places were changed not only to protect those involved, but also to offer the reader a piece of Frankfurt contemporary history. Körner said that he had moved part of the story to Bockenheim in order to be able to include the student movement and the actions of the Verfassungsschutz against the Sponti scene in the events.

What is particularly important to the former public prosecutor is to draw a realistic picture of the work of the public prosecutor's office and to incorporate this into an exciting and stirring story. He succeeded very well in that. When describing the individual steps in the investigation, the book clearly shows that the author is "of the trade". Even if individual passages seem very objective, the novel is never dry or even boring. However, there are two minor weak points that cloud the enjoyment of reading a little. On the one hand, names like Jonny Langbein, Franz Nothelfer or Kommissar Frühauf seem too obviously invented, which in connection with the very authentic descriptions seems somehow inconsistent. Also, the decision to let some characters speak with a strong dialect isn't always successful. When crook Toni tells in deepest Hessian about the sexual abuse of a drug addict, it's not only a bit exhausting to read, but also a bit inappropriate in tone. This may, however, be primarily due to the fact that the Hessian dialect is primarily used humorously in film, theatre or literature, with the exact opposite being the case here.

Beyond these minor points of criticism, "Totengräber vom Goetheturm" is an exciting and interesting thriller, which gains its very special appeal not only through its local references, but also through a somewhat different, more realistic approach to the Enlightenment. The combination of the two cases was successful, although their real models in reality had nothing to do with each other. Anyone who would like to take an exciting journey through time to Frankfurt in the 1970s and gain an insight into the work of the public prosecutor's office can warmly recommend the investigations into the "gravedigger of the Goetheturm". Worth reading!

The author in front of the Goethe Tower. Photo: Sebastian Betzold