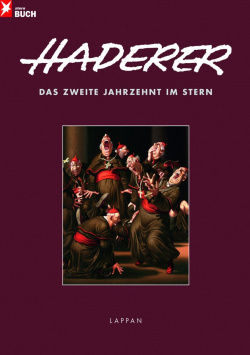 Haderer - The Second Decade in the Star

Gerhard Haderer can celebrate two big anniversaries in 2011. On the one hand, the cartoonist will be 60 years old this year. On the other hand, he has been delivering great drawings for stern week after week for 20 years now. After the Lappan publishing house had already published a large volume with Haderer's works of the first ten years in 2001, "Haderer - Das zweite Jahrzehnt im stern" will follow in 2011. Accompanying the large anniversary exhibition at the caricatura Museum Frankfurt, the beautiful 400-page illustrated book contains all the drawings that Haderer put on paper for the stern between July 2001 and May 2011.

Hader's hyperrealistic style, coupled with his enormous power of observation, leads to an incredibly funny and at the same time almost painfully revealing view of everyday madness. Since he selects week after week the topics that have occupied the entire country, the book also provides an amusing overview of ten years of Germany's socio-political history. Whether the introduction of the euro and its enormous unpopularity among the citizens, the attacks of 11.09.2001, which Haderer made the subject of his cartoon just nine days later, the 2002 election campaign, in which a younger electorate was also to be addressed, the extremely dry summer of 2003 or the 130th anniversary of the garden gnome, the casting show Wahn or the World Cup in his own country, there is hardly an important topic of the last ten years that is not illuminated here in a humorous and biting way.

Although many politicians, from Stoiber to Merkel, Bush, Obama, Schröder or Westerwelle, are in the centre of the drawings, also the "normal citizen" gets his fat off again and again. The reader learns, for example, what a typical German holidaymaker looks like, how to behave discreetly as a lottery millionaire, which war is fought every autumn in German gardens, what the right Christmas present for couples of many years looks like or why winter comes as a complete surprise every year.

Whether politics or church, whether small or large embarrassments of social life, Haderer hardly seems to know a taboo - and that's a good thing. His comedy is credible and hits exactly the right nerve. This may not always work for everyone, but it's almost impossible not to burst into laughter at least a few times while reading this volume. Finally, some good news: if you can't get enough, there's still the band with the works from the first ten years stern. More than 1200 works on 800 pages in two volumes - more Haderer is really not possible!