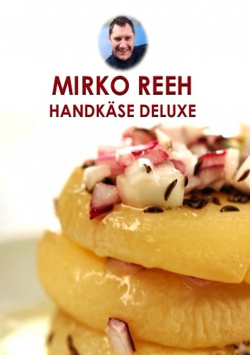 When you hear the word Handkäs two things come to your mind: Frankfurt and music! Because Handkäs with music is simply a very firm part of Frankfurt's kitchen culture and is known beyond the borders of the Main metropolis. But many other dishes can be conjured up from the popular sour milk cheese. Star chef Mirko Reeh, who distinguishes himself by a certain versatility with various TV appearances, cooking schools, restaurant boss and life chef, has recognized the variation possibilities of hand cheese and has already celebrated these in numerous cooked cakes. After the participants repeatedly suggested to him to write a cookbook about Handkäs, Rhee has now fulfilled this wish.

In "Handkäse Deluxe" Mirko Reeh presents, after a short introduction about the history and production of hand cheese, sixty recipes in which the little hearty delicacy takes centre stage. The very classical variant and the musical version should not be missing, of course, but are only the starting shot for a whole series of much more unusual recipe suggestions. Whether Mirkos hand cheese bread, hand cheese carpaccio with sour salsa hand cheese fondue or cooked cheese schnitzel with baked potatoes, the book proves time and again that there are hardly any limits to kitchen creativity when it comes to hand cheese. Some of the recipes sound a bit unusual at first, such as the beetroot casserole with hand cheese, gratinated hand cheese with figs and thyme or hand cheese in a Parma ham coating on pear vanilla puree. But if you have the courage to get involved with the more daring combinations, you will quickly recognize how versatile the popular little delicacy can be.

The recipes are presented very clearly and can be easily recooked through precise, simple descriptions. Mirko Reeh avoids an all too flowery decoration, takes himself completely back as a person, thereby really putting the hand cheese in the centre and restricts himself to the essential instructions for the preparation of the texts. The whole thing is rounded off by a few photos that sometimes make you want to try out some of the creations presented here very quickly for yourself.

"Handkäse Deluxe" is formally seen as a very classic cookbook, but brings a breath of fresh air into the kitchen. Whether hearty or sweet, warm or cold, hearty or light - what Mirko Reeh brings out of the small Hessian delicacy should surprise even the most aficionados of hand cheeses. So if you want to think outside the box and don't always want to enjoy your handmade cheese with the same music, you should definitely buy this cookbook. Absolutely recommended!