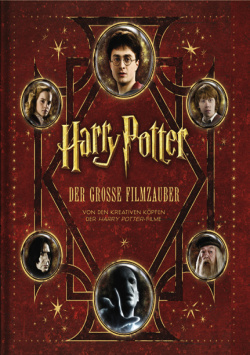 For all fans of the "Harry Potter" movies, "Harry Potter - Der grosse Filmzauber" is a wonderful companion book in which the creative minds behind the scenes allow a glimpse behind the scenes, the actors remember the shoots and many great photos and drawings immerse the reader deep into the world of Hogwarts.

The magically designed book offers a nice overview of all films, including a small preview of the last part, with all information provided directly by the makers. There are always excerpts from the diary of producer David Heyman to read, Daniel Radcliffe and other actors remember special events from the shooting and also the production designer Stuart Craig delivers many interesting anecdotes about his work. In addition, all figures and scenes are presented in detail, and the way in which this is done makes this book so wonderful. In addition to numerous beautiful and so far unpublished photos, in which even small details, which get a little lost in the film, are given more attention, the book includes all sorts of beautiful reproductions of small props (in English) from the films. For example the program of the Quidditch World Cup or the Christmas ball at Hogwarts, a brochure from the Weasley twins' shop, some announcements from Dolores Umbridge, an identity card from the magic ministry, labels from magic potion bottles, the letter Harry received at Hogwarts or the card of the wanderer. In addition, some pages can be opened separately and offer a great view of the Winkelgasse or the family tree of the Black family.

"Harry Potter - The Big Film Spell" is an extremely lovingly designed gift for all fans of the student magician. A great document that proves why "Harry Potter" is a real phenomenon not only as a book, but also as a film. Absolutely recommended