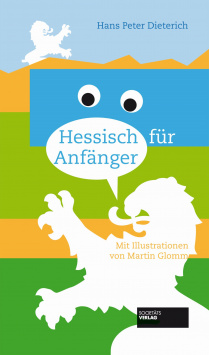 The Hessian himself, his dialect, his culinary preferences or also his endearing peculiarities, which can seem a little rough to outsiders, are often a mystery for non-Hessians. How can you love Ebbelwei that much? What makes Kerb so special? How's Hesse doing with the grammar? And what does Hesse mean when he speaks of "Gelersch"? Hans-Peter Dietrich, archivist at the Frankfurter Neue Presse, explores these and many other questions from the perspective of a "hargeloffener". Dietrich, who has lived in Frankfurt since 1985, tells many amusing anecdotes in "Hessisch für Anfänger" (Hessian for beginners), which he uses to introduce the reader to the Hessian dialect and the very special idiosyncrasies of Hesse. Supported by charming illustrations by the graphic artist Martin Glomm, the result is a large amount of reading that both Hesse and non-Hesse can enjoy.

The book is characterized by a good power of observation on the part of the author. How he describes, for example, the very special way of a Frankfurt subway driver to lend his very own Hessian touch to the factual "Please stay behind" seems to have been taken directly from life and is therefore so amusing. And also a typical welcoming ritual of two Hessians, from the obligatory "egg, gude, unn wie?" over "Fraach mich net" to the unavoidable "Isch mach misch forrd" is familiar to everyone who walks through the region with open ears. But the book does not only want to be a humorous pastime. Dietrich is also obviously anxious to get to the bottom of the origins of idioms, traditions or very special character traits. And in doing so, he unearthed many insights that could be surprising even for real Hessians.

Although language research is carried out here in a certain way, the book never seems too scientifically dry. Rather, Dietrich succeeds very well in keeping the daring balance between information transfer and humour in his texts. It becomes clear again and again that the native Lower Franconian really loves his adopted country and its inhabitants. Whether he is concerned with food, celebration, locomotion, the animal kingdom or the many names for children, the passion for the material can always be read out, which increases the pleasure of reading this book even more.

"Hessisch für Anfänger" (Hessian for beginners) is, according to the title, excellently suited for getting to know and love the Hessians. But also for all inhabitants of this beautiful federal state the book is recommendable, because it is simply fun to be held up charmingly humorously the mirror and to discover the background of some idioms, which one gives as a matter of course day by day of itself. And there is one very clear thing for that: Recommendable!