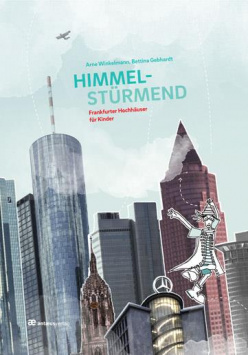 The Frankfurt skyline with its skyscrapers is really unique in Germany. But not only adult visitors of the city are enthusiastic about this scenery. Children's eyes also light up the skyscrapers again and again. So it's no wonder that the rare opportunities to visit various skyscrapers or even admire Frankfurt from the very top are constantly becoming an absolute crowd-puller. Whether the skyscraper festival, which takes place at irregular intervals, or special guided tours, not only to admire Frankfurt's skyscrapers from the outside, is a real spectacle for young and old.

However, as a rule the skyscrapers remain closed to the public. But for interested children there is now a nice opportunity to get to know the different buildings that make up the unique skyline. In their book "Himmelstürmend", Arne Winkelmann and Bettine Gebhardt from the Deutsches Architekturmuseum in Frankfurt present the individual skyscrapers to young readers aged 8 and over in a charming, interesting and entertaining way. After a short excursion into Frankfurt's city history, during which important church towers or gatehouses such as the Dreikönigskirche, the Eschenheimer Turm or the Bockenheimer Warte are presented, a tour of the city centre starts, from the trade union building via the Westend Tower, the Junior House or the Messeturm to the new ECB Bank building or the striking Westhafen Tower. And also the AfE Tower, which was razed to the ground in 2013, will be honoured once again here.

The individual structures are each presented on a double page. Beside a picture and an informative profile with all important data there are also further interesting and also curious facts to each tower, which are presented by the book mascot Messi. And since pure information transfer for children is often a bit boring, there is also a participatory action to each high-rise, which usually consists of solving a tricky task.

A total of 19 buildings are presented in a lovable and informative way. The accompanying tasks do not only increase the fun factor of the book. The effect is also achieved that the information that the child reads about the individual buildings is better remembered. The whole thing is designed in such a way that young readers don't have to be surprised if they catch their parents getting lost in reading the book. A really beautiful homage to the Frankfurt skyline, which brings architecture closer to young readers in a child-friendly way. Absolutely recommended!