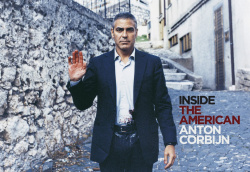 Anton Corbijn has made a name for himself as a photographer during his career. The Dutch star photographer, who is one of the world's leading portrait photographers, has also worked successfully as a director of video clips (for Herbert Grönemeyer, among others), designer and graphic artist. Since he celebrated great success with the music film "Control" in 2007, Corbijn is currently concentrating primarily on making feature films. But his passion for photography does not let him go. For accompanying his second feature film "The American", in which George Clooney plays a hit man, Corbijn has published a great illustrated book in which he gives the reader an insight into the shooting in Italy in Abruzzo (Castel del Monte) and southern Sweden by means of wonderful photographs.

In 116 mostly full-page pictures, which Corbijn enriches with handwritten notes and sketches, "Inside The American" offers a kind of script diary, which not only shows the stars of the film in sometimes simply beautiful, sometimes amusing and sometimes very personal, private moments, but also captures the picturesque locations in fascinating pictures. Whether George Clooney, with a broad grin on his face, picks up the bleating of a sheep with his mobile phone, whether the incidence of light transforms the shooting location in the woods into a real paradise, or supporting actor Paolo Bonacelli is photographed smoking during lunch break, Corbijn finds the fascinating and beautiful especially in small moments. The play with light and shadow, the contrast between staged portrait photos and still lifes of natural beauty make this book incredibly fascinating.

"Inside The American" is the eleventh book Corbijn has published with Schirmer/Mosel over the past twenty years. It underlines once again that Corbijn's good reputation is more than justified. He succeeded in creating an illustrated book, which is a real treat not only for all photography lovers, but also for cineasts. Absolutely recommendable!

One more comment: Corbijn's notes are left in the book itself in the English original. A translation of the texts is enclosed with the book.