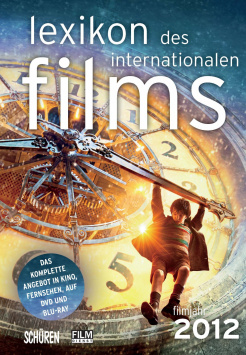 The film year 2012 was a very versatile year, full of positive surprises, small disappointments and lovable homages to the magic of cinema. While the "Ziemlich besten Freunde" became a big surprise hit, the Frenchman Michel Hazanavicius could win several Oscars with his silent movie homage "The Artist". Besides many big blockbusters like the "Avengers", James Bond's return to "Skyfall" or the reunion with Middle-earth in "Der Hobbit", there were again many small film pearls in 2012, which could be discovered in cinemas, on TV or on DVD.

The "Encyclopaedia of International Films" offers all film enthusiasts the opportunity to discover all the big and small films, whether cinema, TV or DVD premieres, and to get to know them with the help of short summaries and all the important information, even with its 2012 volume. It's just fun to browse through the work, to see which movies you've seen, which you actually wanted to see and which have completely passed you by, even though they actually sound very interesting. But the interested reader is not only presented with all the films of the year in alphabetical order. The book deals with the complete film year with all its peculiarities month by month right at the beginning. After this introduction of almost 20 pages there follows a breviary of almost 40 pages about Martin Scorsese, who presented a wonderful homage to the beginnings of cinema with "Hugo Cabret" in 2012. In this multi-part breviary, contributions from the magazine "Filmdienst" from the years 1992 to 2013 are compiled, thematically dealing with Scorsese's sources of inspiration, his working methods and his role as a film historian and film keeper. Finally, three more conversations with the director are offered.

Almost 400 pages are followed by the encyclopedia of the films of the year 2012, which presents the best films of the year according to the editorial staff of the "Filmdienst", followed by films worth seeing and the cinema tip of the Catholic film critics. Outstanding DVD and Blu-Ray editions are also honoured in a separate chapter.

On another 14 pages the results of the most important film award ceremonies in 2012 are summarized once again, from the German Film Critics' Award to the Berlin and Cannes Film Festivals to the Oscars. The lexica of directors 2012 and the original title complete the book. Even if you may not necessarily agree with every rating or with the choice of the best films of the year, the "Lexikon des internationalen Films 2012" is still an absolute must for every film lover. There is simply no more comprehensive and clear listing of all film premieres and information about the film events of the year. The comprehensive breviary about Martin Scorsese is a wonderful and extremely worth reading addition, which in the end only allows one rating: absolutely recommendable!