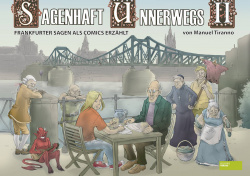 Legendary not without II

The history of Frankfurt is full of exciting, amusing and surprising stories that can be retell in different ways. The comic-strip artist Manuel Tiranno has chosen a very entertaining and charming way to amuse the readers of the Rhine-Main section of the FAZ since 2007 with historical and legends from Frankfurt. Every month he presents a new story, which is then published in four parts week after week. Already in 2010 a first anthology of Tirannos comic legends was published by Societäts Verlag. After this book enjoyed great popularity and numerous new stories were added in the almost two years after its publication, "Sagenhaft unnerwegs II" followed at the end of 2012.

We can again accompany the grandfather and his granddaughter on their walks through Frankfurt. At the Römer, in Nordend, on Berger Strasse, in Sachsenhausen or Oberrad, the old man tells the girl stories of quarreling market women, of a stonemason journeyman in love who almost costs his life to court the wife of his heart or of a supposed haunted house on the Römerberg. He reports on the battle between Frankfurt and Kronberg, reveals how a cunning tailor managed to escape a terrible court decision and explains the history of the Alten-Limpurg house. Death, greed, love, disobedience, war, tradition - all this is told here in a sometimes amusing, sometimes gloomy, but always charming way.

28 new comic episodes "Sagenhaft unnerwegs II" has to offer next to a foreword by comic expert Andreas Platthaus - 28 reasons that speak for this book. It's simply fun to go on a discovery tour through Frankfurt's history together with the grandfather and his granddaughter and to have numerous legends so lovingly presented. Whoever wants to discover Frankfurt in a truly legendary way can warmly recommend this second volume. Recommended]