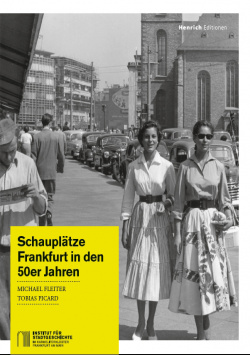 Locations - Frankfurt in the 50s

The Institute for City History invites you to a journey back in time to the 1950s until the beginning of November with the photo exhibition "Locations - Frankfurt in the 50s". Accompanying the exhibition is the book of the same name, which immerses itself even more comprehensively in this decade in the Main metropolis. In addition to numerous photos, Michael Fleiter and Tobias Picard have compiled some interesting accompanying texts and have also included documents, newspaper clippings or advertising posters from the time. The result is a fascinating and extremely entertaining contemporary document that impressively shows the changes the city has been exposed to in the last sixty years.

Many places that still shape the cityscape today can be recognized here, although there are often great differences to today's appearance. This counts for the streets around the Eschersheimer Tor as well as for the parking garage Kornmarkt at the Hauptwache or the square around the Kaufhof. There are also real surprises, especially for younger Frankfurters, such as the fact that the Dippemess took place on the Römerberg until 1968 or was fished in the Main until the mid-1950s.

The mixture of pictures and accompanying texts makes this book an extremely informative but also entertaining journey through time into the 1950s. Even if you don't belong to the generation that witnessed this epoch in Frankfurt itself, this view of an important part of the city's history, which is steeped in nostalgia, is enormously exciting. The book shows in a very vivid way that a city like Frankfurt is subject to constant change and has to adapt to the socio-political circumstances of the time in order to function.