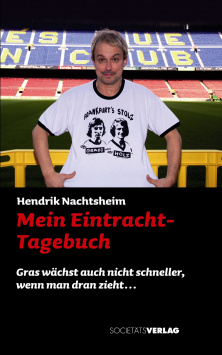 Grass does not grow faster if you pull on it...

Hendrick Nachtsheim, part of the comedy duo "Badesalz" and a self-confessed Eintracht fan, has delivered a more than respectable success with his column collection "Strap your scarf tighter and spit in your ears", which not only football fans can enjoy. Now Nachtsheim is following up with "My Eintracht Diary". The second collection of columns, which Nachtsheim has been publishing in various newspapers for several years now, once again strikes a balance between everyday humour, sporting expertise and infectious passion.

The way in which the playful ups and downs of harmony in the 2008/2009 season are illuminated here is simply fun to read. Even though, like the author of these lines, one rarely comes into contact with the round leather and cannot really comprehend the fascination triggered by the fact that 22 adult men run after this little ball, the passion that Hendrick Nachtsheim brings up for his favourite club is nevertheless extremely contagious. Probably because he uses little stories from everyday life to explain the games of harmony and the performances of the players in an original way.

>He compares a 1:1 agreement against Bayern Munich with a man from the US state of Colorado who was run over twice by a car on one day and sustained only minor injuries. Or the performance of Eintracht is equated with a crazy dream, which was composed of all of Nachtsheim's favourite series. The term "mindmapping" is explained in order to establish realistic goals for the positioning of harmony in the table. The reader gets to know the different facets of Nachtheim's buddy "Brocken", who is sometimes desperate when he thinks back to the times when his favourite club could still win one victory after the other. Or the work of Michael Skibbe brings back memories of Nachtsheim's maternal grandmother and her porcelain dachshund.

"Mein Eintracht-Tagebuch" mixes in a charming way Hendrick Nachtsheim's humour with his infectious passion for a club, to which he also stood by his side in not quite so good sides. There is also no lack of criticism, which, however, is always appropriate in such a way that on the one hand the author's expertise, but also his love of harmony, remains perceptible. An entertaining, amusing book, which is a must for every Eintracht fan, but is also fun if you have only limited or no idea about the Bundesliga and its clubs. Absolutely recommended!