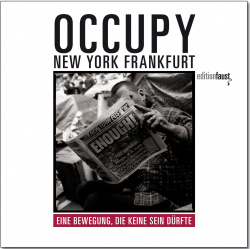 Occupy - New York, Frankfurt: A movement that shouldn't be a movement

When the "Occupy Wall Street" movement was launched by the Canadian Adbusters Media Foundation through Internet calls, it could not be expected that the action, initially limited to a few Facebook and Twitter supporters of the consumer-critical foundation, would soon grow into a global phenomenon. Not only in Zuccotti Park in Lower Manhattan, but in many other cities around the world, demonstrators erected tent cities to protest around the clock against social inequalities, uncontrolled speculative banks, or the far too great influence of the economy on politics. While in New York in particular there have always been clashes with the police and finally an eviction of the tent city, the "Occupy" supporters in Frankfurt are now almost part of the cityscape.

The book "Occupy - New York, Frankfurt" documents this movement in words and pictures, comparing the two financial cities New York and Frankfurt directly. Both the photographs and the text contributions are a very complex examination of the movement and a critical questioning of its effectiveness. However, this is constructive criticism which, on the one hand, underlines the importance of such a broad-based movement, but, on the other hand, also emphasizes that it is precisely for this reason that the movement can present clear goals and proposed solutions. And this is precisely where the greatest criticism of the Occupy movement comes in. For without concrete demands, a protest movement like this quickly loses its power of persuasion, its strength and inevitably its supporters.

The book wants to contribute to making the Occupy movement accessible to a broader resonance. The photos taken by the renowned photographers Ashkan Sahihi in New York and Bernd Kammerer in Frankfurt are a particularly good example of this. While the black-and-white photos of Sahihi were taken with an analog camera, Kammerer's color photographs were taken digitally. Thus not only two cities face each other here, which approach the same goals in different ways. Even the art forms that record this originate from the same source medium, but are implemented in completely different ways. The result is a unique snapshot of the movement, which is convincing from an artistic as well as a journalistic and documentary point of view.

Accompanied by text contributions by Jan Seghers, Jens Prewo and Eduard Erne, among others, "Occupy - New York, Frankfurt" is a contemporary document, critical examination and artistic photo volume all in one. An entertaining, interesting and above all worth seeing book, which is absolutely recommendable on several levels!