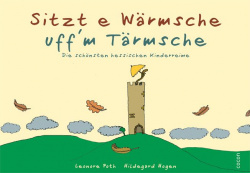 Illustrator Leonore Poth has already packed Hessian culture into charming pictures accompanied by amusing verses in "HessenEssen". While there it was still the Hessian food culture, her new book "Sitzt e Wärmsche uff'm Tärmsche" deals with the most beautiful Hessian nursery rhymes. Together with author Hildegard Hogen, Poth presents numerous popular rhymes in a lovable way, which are provided with small explanations as well as amusing illustrations.

Whether "The Sows with Goards", the "Chimney Fejer chalk-white" or the "Läuserscher", here the reader repeatedly encounters rhymes that one knows from one's own childhood, but also rather unknown verses. Sometimes very amusing, sometimes biting and angry or just wonderfully meaningless, for various occasions like New Year and Easter or as a declaration of love to tasty "Worscht", here there is the right rhyme for every situation.

The Hessian language gives the rhymes their very special charm. And even if you want to shake your head in wonder at many a play on words, this book provides amusing moments not only for small Hessians. So if you want to know what the "Wärmsche uff'm Tärmsche" is all about or you want to know what it is about the "Weck vom Bäcker Beck", then you should definitely read the book with the most beautiful Hessian rhymes for children.