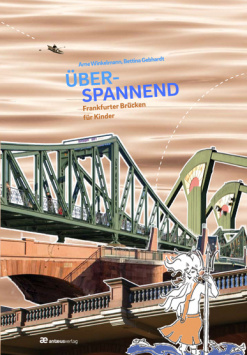 The cityscape of Frankfurt is not only shaped by the bank towers, which create a really impressive skyline at night. No, also the many bridges that connect "Hibbedebach and Dribbdebach" - and of course other parts of the city - with each other. Some bridges are more recent, such as the new Osthafen bridge. But there are also very traditional bridges like the Iron Bridge or the Old Bridge. "Überspannend" explains the history of these bridges and is thus aimed at young Frankfurters. Arne Winkelmann and Bettina Gebhardt, the team behind "Himmelstürmend", the beautiful high-rise guide for children, present twenty Frankfurt bridges in their book. In doing so, they show their young readers the architectural aspects of the various bridges briefly and concisely, but also very vividly at the same time. Even as an adult you can still learn a lot - because only very few people have ever thought about which of Frankfurt's bridges is a beam bridge, an arch bridge or a roller weir.

But of course there are also some historical facts, an architectural-historical classification and, of course, information about year of construction, length or span. These facts are enriched with short anecdotes and many pictures, which of course intensifies the fun of browsing through the book. And there are also a few little puzzles, which give the reading an interactive character.

Let's be honest: A book about bridges - that doesn't sound really exciting. This is not necessarily something that children would immediately write on their next wish list. But the book is made really lovable and exciting. And if you go on a small excursion with your child after reading through the almost 50-page book and visit some of the very different bridges in the original, then something like enthusiasm could arise not only among young but also among older readers. Because some of the bridges presented here are not only very beautiful, but also have an exciting history or a fascinating function (such as the Airlift Monument).

Therefore, "Overspanning" is not only a successful continuation to "Skystorming", but also a nice way for children to get to know special aspects of their city. And for that there is then also deserved a clear: Recommendable!