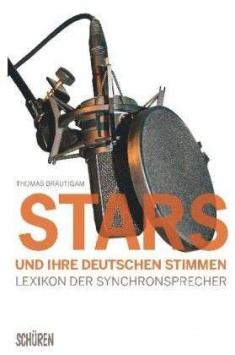 Stars and their German voices - Lexicon of dubbing actors

Didn't you always want to know who is behind the distinctive voice of Clint Eastwood? Or to whom does Kate Winslet owe her beautiful German voice? Who makes Julia Roberts laugh so charmingly? Who makes Johnny Depp sound so fucking cool? Or are they interested in which speakers cartoon heroes like Homer Simpson, Captain Future or Spongebob Schwammkopf vocally bring to life? Then you should definitely go for Thomas Bräutigam's "Stars und ihre deutschen Stimmen" (Stars and their German Voices), the lexicon of dubbing actors. After a brief introduction to the history of dubbing, the working methods of the actors and a critical look at the advantages and disadvantages of German dubbing, the book lists some of the best and best-known dubbing actors. Most of them are presented with a small photo and a short outline of their work in front of the camera and microphone. To browse and browse through this part of the book is really a lot of fun, especially as there are always big surprises, one compares the often unknown faces with the familiar voices. Also to see which speaker lends his voice to very different stars is an extremely exciting affair for interested readers.

Whoever is looking for a certain German voice can find the corresponding dubbing actor in a separate directory on the basis of international actors. And last but not least, there is a selection of films and TV series whose most important roles are assigned to their respective speakers. The search for a narrator is possible in three ways.

Even if the encyclopedia is not complete (an enclosed CD with an extensive, supplementary list of films and TV series and their narrators as a pdf file is enclosed with the book) and not all of the more than 300 narrators presented are represented with a photo, the book is a must for all those interested in film dubbing. Finally, the partly excellent work of the people, who usually stand in the shadow of the big stars or whose work is even demonized by dubbing opponents, is appreciated. The fact that good dubbing is an art that is closely related to the quality of the speakers is too often forgotten - or taken for granted. But in this book the voices are the big stars - and that's why the dubbing dictionary can only be highly recommended!