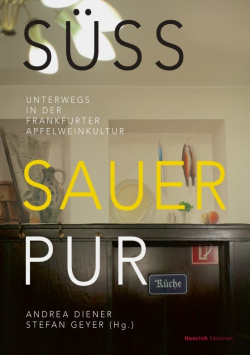 The Hessian in general and the Frankfurt in particular loves his apple wine. And so there are not only countless apple wine taverns in the region and all sorts of bits and pieces around the topic, from Bembelfeuerzeug to the ribbed wind light. There are also numerous works on the book market in which connoisseurs and enthusiasts comment on the subject of cider. Also "Süss, sauer, Pur - Unterwegs in der Frankfurter Apfelweinkultur" is such a book. And indeed, topics are also dealt with here that have already been addressed in apple wine literature on several occasions. And yet this work is a little bit different.

This already begins with the preface in which Andreas Maier writes about the transfigured view of cider culture in cider literature. This is followed by 22 contributions by twelve Frankfurt authors on apple wine, beer and medlar, culinary delights, history and "Sonst noch". The reader is guided through a typical apple wine tavern as well as through the orchards. Here you can learn more about the Bembel, the cult of cider and learn what's on the menu in Frankfurt cuisine. This book also includes a trip on the Ebbelwei-Express and a tribute to cider icons such as Heinz Schenk.

The texts are written in a very entertaining way, offer some really interesting insights into the subject and are, of course, by and large an homage to the Frankfurt apple wine culture. But there is not only the transfigured look described in the preface, but also some very honest, unembellished nuances, such as the descriptions from the everyday life of an apple wine landlord. These are the moments that make the book stand out from the crowd and make it worth reading.

Enriched with some very nice pictures "Sweet, sour, pure - On the way in the Frankfurt apple wine culture" is a clear must for every apple wine lover and all who want to become one. Apart from that it is also a nice work about Frankfurt's eating and pub culture, about some parts of the city and of course about real Frankfurt types. A book as versatile as the world of cider itself - and therefore absolutely recommendable!