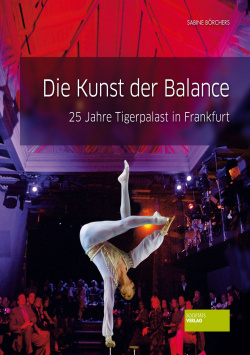 The Art of Balance - 25 Years Tigerpalast in Frankfurt

If there is a place in Frankfurt that deserves the term institution, it is the Tigerpalast. Not only that its founders Johnny Klinke, Margareta Dillinger and Matthias Beltz, who died far too early in 2002, brought the Varieté Theater back to Frankfurt in 1988. With their concept, they have also virtually given the go-ahead for a renaissance of the metropolitan vaudeville arts. For 25 years now, the Tigerpalast has held a clear top position. This has not only been achieved through the constant commitment of internationally renowned artists. The mixture of first-class Varieté art and top gastronomy worked out with co-founder Robert Mangold also makes the Tigerpalast so special.

The great love for Varieté unites the makers of the Tigerpalast and the journalist Sabine Börchers, who has often reported on the revues on this very special Frankfurt stage for newspapers such as the Frankfurter Neue Presse. The resulting contact has now led to Börchers writing a book about the Tigerpalst and its creators, and thereby one of the rare glimpses behind the scenes of the house and into the archives could throw. The result is called "Die Kunst der Balance - 25 Jahre Tigerpalast in Frankfurt" and takes the reader on an exciting, interesting and highly amusing journey through a quarter of a century of the Tigerpalast.

The book, however, does not begin with its founding, but with a brief look at Frankfurt's Varieté history, in which the Schumann Theater at the main train station played an important role. The following chapters deal with Johnny Klink's eventful career, the stony path from the first idea to the realization of the vaudeville dream and the conversion of the former Salvation Army building into the Tiger Palace. It is precisely in this part of the book that it becomes clear with what passion Klinke and Dillinger have pursued the realisation of their dream. Reading the book, it also becomes clear how impossible its realization actually was, which was not only due to the misconception of some decision-makers in the city that Varieté was something one would associate with the red light district.

With the grand opening of the Tigerpalast, the book shifts its focus to the great artists of world standing that Margareta Dillinger brought to Frankfurt. A special feature of the Tigerpalast also becomes clear. The artists are given the unique opportunity to live with their families in specially furnished artist apartments directly in the house during their several-month engagement. Thus the Tigerpalast becomes not only a workplace, but also a piece of home, the entire team becomes a kind of extended family. Also this is a reason for the fact that the Tigerpalast enjoys a completely special, very positive reputation in the industry and it succeeds so again and again to win completely outstanding talents for the Revue.

This high level determines however not only the happening on the stage. In the culinary field, too, the demand for genuine top-class gastronomy quickly increased, as is clearly illustrated in the third part of the book. The fact that high quality also attracts a corresponding audience for the eye and palate becomes clear in the next chapter, which deals with "premieres and politics" and also takes a look at the guest book filled with prominent names. Before a final balance Sabine Börchers takes a short look at the events that the Tigerpalast presented outside the house, whereby the historical high-wire race on the occasion of the city anniversary naturally takes on a very special significance here.

The fact that Johnny Klinke and Margareta Dillinger trusted Sabine Börchers so much that they not only opened themselves up to her in interviews, but also gave her access to a lot of archive material makes "The Art of Balance - 25 Years of the Tiger Palace in Frankfurt" a book that is bursting with love for this Frankfurt institution and vaudeville art and reveals fascinating and extremely entertaining insights into a very special world to the reader. It is a worthy contribution to a big jubilee, which reads very pleasantly and has to offer besides still some wonderful pictures from 25 years Tigerpalast. For that there is a more than deserved one: Absolutely recommendable and a hearty "Happy Birthday Tigerpalast"! 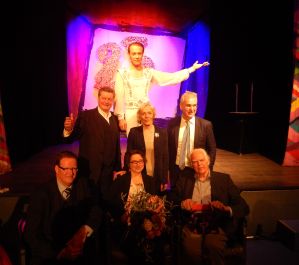