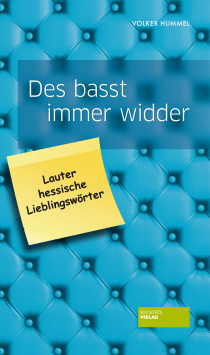 Sometimes you get the impression that hessian is only a pure comedy language. Bath salts and mouthchairs, for example, have proved to a broad audience throughout Germany that "humour" really knows no bounds and Michael Quast shows year after year with the "Hessian Moliere" how excellently the Hessian dialect is suited for humorous play with language. And anyone who walks through the crowd with open ears at larger events all over Hesse will notice again and again that people who otherwise speak dialect free High German suddenly fall into the deepest Hessian if they have something funny to tell their counterparts. Whether simple comedy, fine language wit or good-humoured regulars' wisdom, the Hessian dialect actually seems to be characterized primarily by a humorous character.

Volker Hummel proves in his book "Des basst immer widder" that this impression may be true, but in the end is much more multi-faceted than it seems at first glance. This is due to the fact that the Hessian has always distinguished itself by a certain quick-wittedness and a biting sarcasm solely due to the geographical location of the federal state. This may also be the reason for Hessen's very own humour. And so it is not surprising that this dialect offers for almost every everyday situation the appropriate saying and the right idiom, which is not only amusing, but can also be full of undreamt-of wisdom.

Gossip & Traatsch, the art of lewe, scheene Werder, animal, unöschlisches or Aldersweisheiden are the focus of this collection of Hessian favorite words. A small treatise on whether it is called Äppelwoi or Aeppelwei is just as important as a look at the Hannebambel and Labbeduddel of the region. The reader also learns that sayings about men's advertising clothing are part of everyday language usage in Hessen. Because often you just feel a little "nebe de Kapp" here. The encounter with people who wear their "Spendierhose aahawwe" is a little rarer. One also learns what the ominous oak car is about or where the state capital Wiesbaden gets its name from.

The book also makes it clear how pietätsvoll the Hessian can be when he says such sensitive things as "With which his bones can mer schun the ebbel voh de Beem". The Hessian is not as rough as his reputation. No, he is loving, puts his offspring on the "Schockelgäulsche", treats himself to "Noch en Grabba ferr de Babba" and lives his life true to the motto "Dear Handkäs` than worstcase". You can tell from the book how much love Volker Hummel has for the dialect and his favourite words. The self-ironic wink of the eye is what makes reading the book so amusing for all Hessians and "placards". But there is a very clear one: Recommendable!