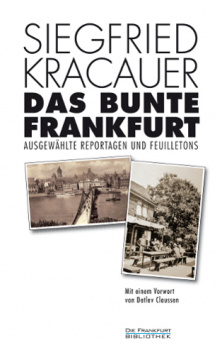 After the re-publication of Henry Jaeger's novel "Die Festung" last year, B3 Verlag continues its "Frankfurter Bibliothek" founded in autumn 2012 with Siegfried Kracauer's "Das bunte Frankfurt". The book is an interesting collection of journalistic works written by the writer in the 1920s about urban life in Frankfurt. On the one hand, the collection is an illuminating work accompanying Kracauer's novel "Ginster", which was the focus of the 2012 series of events "Frankfurt Reads a Book". For it becomes clear again and again in the reports that Kracauer also used his journalistic work, which he carried out for the Frankfurter Zeitung after the First World War, to collect information and ideas for his literary work.

On the other hand, as Detlev Claussen describes in his foreword, the book also offers a "peephole into the world of yesterday". The reader can witness the discussion about the construction of the first skyscraper, attend a celebration for the inauguration of the New Bridge, take a walk along the Main River or visit the Frankfurt Spring Fair. Siegfried Kracauer also writes about an architectural competition for a new cemetery in the Israeli community of Frankfurt, about the Osthafen or about the working methods of the city council.

The book is interesting and worth reading in many respects. On the one hand, it makes clear the differences and also the similarities of the journalistic work of then and now. On the other hand, the reader is also introduced to social, architectural and cultural changes in the city after the end of the First World War and the enthusiasm and heated discussions they triggered. And also here some clear parallels to the present can be made. In addition, it is simply very interesting to see how certain buildings and institutions that are a matter of course for Frankfurters today were received when they were new or in the planning stage.

That makes "Colorful Frankfurt" virtually predestined for inclusion in the "Frankfurt Library". Anyone who is interested in Frankfurt's city history or would like to gain an insight into Siegfried Kracauer's journalistic work should not miss this exciting piece of Frankfurt journalism. Recommended]